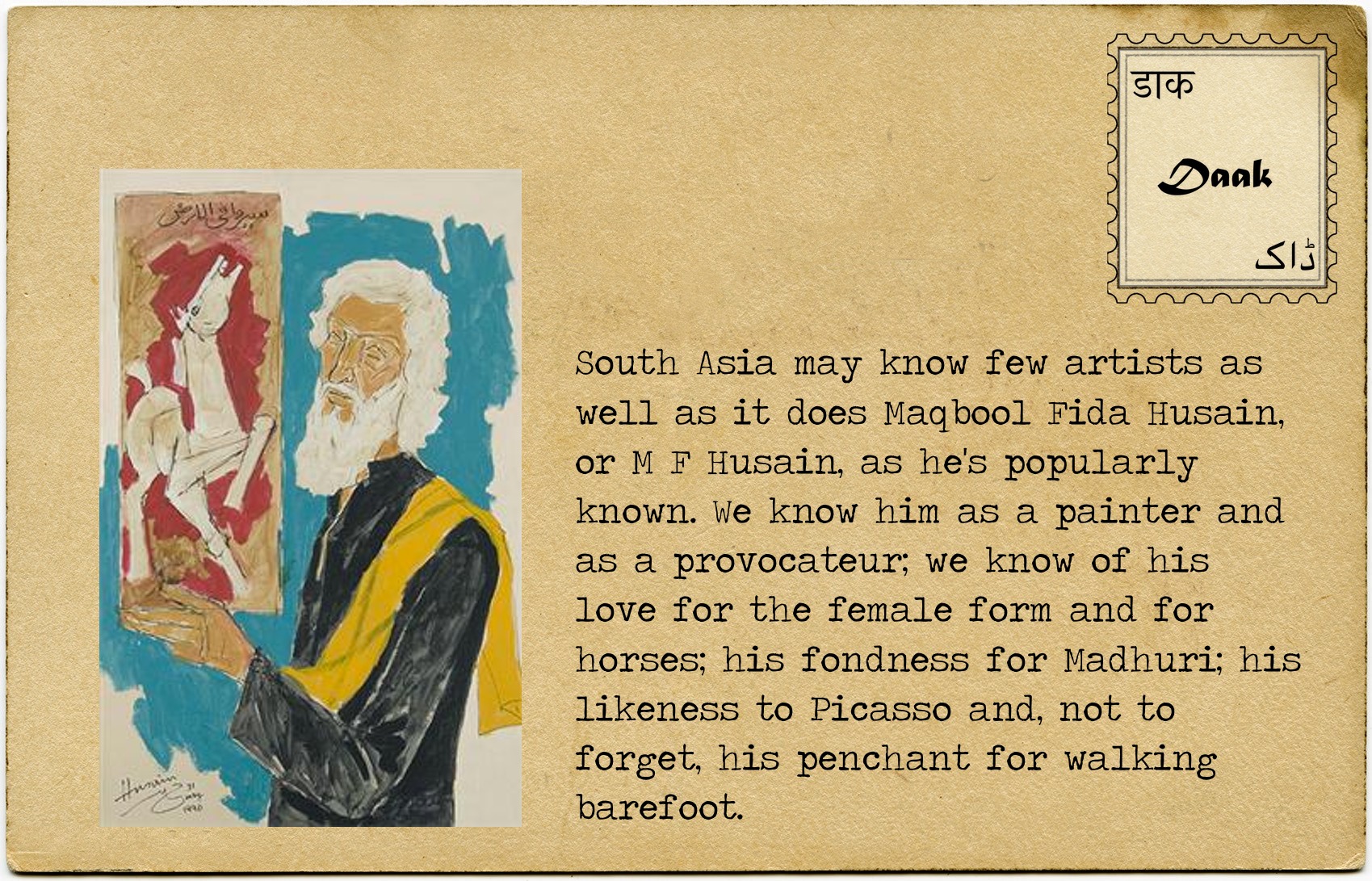 Painter, provocateur and exile: Who was M F Husain?

South Asia may know few artists as well as it does Maqbool Fida Husain, or M F Husain, as he’s popularly known. We know him as a painter and as a provocateur; we know of his love for the female form and for horses; his fondness for Madhuri; his likeness to Picasso and, not to forget, his penchant for walking barefoot.

We think we know Husain by virtue of familiarity — through personal stories and bits of information collected through our lives. Seldom, though, is one able to grasp the entirety of the phenomenon he was.

In an interview at a very young age, I mentioned that I loved to paint. My school principal followed this up with a question — who was my favourite artist? I involuntarily replied, “M F Husain”.

This was before the time I spent my days trawling the internet for South Asian painters. I knew precious little about art — but I did know of Husain. I possibly read about him in school textbooks or heard of him in the news. How I was introduced to him I can’t recall — an unsurprising detail given that his presence was everywhere, including in my friend Prachi’s life.

Prachi, with whom I’ve researched this article, knew of Husain since a very young age for she saw his painting in her uncle’s house — a gift from a collector to her uncle. She remembers it being a dark painting — deep colours and vague, undefined figures. The most striking thing, she says, was its size. It fit half a wall and had a few bright strokes of yellow. She couldn’t take her eyes off it. With Husain’s work, you simply cannot.

Leaving the room on the day of the interview, I knew I had to look him up and somehow force myself to like his work — as if to make that childish lie a truth. With his graceful palette and bold strokes, it wasn’t hard at all to make him a favourite artist.

“A thing of beauty is a joy forever”, 2007. Acrylic on canvas. Mathaf: Arab Museum of Modern Art.—Photo by author

Last week on a museum run in Doha, I walked into the Mathaf: Arab Museum of Modern Art and was struck by a large painting with the words “Quit India movement” and a silhouette of Gandhi. Immediately, I squealed to my friend that it was a Husain exhibit. I could now recognise his style.

Curated by Ranjit Hoskote, it takes you through Husain’s oeuvre in a guided tour — you see his life, fragments of poetry; you see his spirituality and his search for home beyond physical boundaries.

Qatar was his country of citizenship in his later life — a passport he held alongside a strong Indian identity. With Husain there is so much noise but precious little that we remember — and what we do remember are the many controversies he flared up.

Why, said my friend, did he paint horses and dancing women? And why did he walk barefoot? She had read it somewhere, she said, and I realised I didn’t know. I was curious to discover too.

At Daak, Prachi and I have spent many hours discussing and writing about South Asian art, but somehow never thought to know more about this artist we knew before all others. We explored some questions we had and answers we sought when it came to Husain, who passed away in 2011 at the age of 95.

Husain’s fondness for horses, as we found out, can be linked to his Sulaimani Bohra roots. During the month of Muharram when Shias commemorate the death of Imam Husain, huge processions are carried out. Glorious taziyas and horses are decorated for it. As a child, he was attracted to the flurry of colours in this ‘festival’ of mourning. Later, he began incorporating the horses into his paintings.

Often, his horses have a feminine grace in their movements — he had said it was the hips of the horses — which is why they look so attractive. A combination of the male and female — aggressive in the front and graceful in the back.

His horses are “charging like a dragon in the front and graceful and elegant from the back.” Very often, these horses are casual strokes of his brush — masterful, powerful and pack a punch.

In his later life, as he took to cinema, he is known to have said:

“People work all their lives and then sleep as if they’ve sold off their horses, I sell off my horses and then make films.”

The feminine form is unmistakably present in each work of his and is often the theme of many. He says it is a manifestation of the search for his mother — whom he lost at a very young age. In the female form, he looked for her. He could not remember her face and painted his women faceless.

This search also led to his obsession with beautiful women — most notoriously, Madhuri Dixit. She was his first cinematic muse — he had a series of paintings inspired by her and made a film featuring her titled Gaja Gamini.

He had first watched her in a film in the early 1990s and was mesmerised by her movements and “beautiful hips”. She continued to be his lifelong muse.

Cinema grew to be his passion in later life to the extent that in an interview he is known to have said, “Painting for me is almost dead. Long live cinema.”

Images of him walking barefoot on Mumbai’s streets came to the fore in 1964, after the death of much-admired Hindi poet Gajanan Madhav Muktibodh. Husain was shocked that such a great poet died without managing to get his works published as a book during his lifetime.

On his way back from the funeral in scorching heat, Husain thought to feel the sorrow of Muktibodh’s demise and removed his shoes. He walked barefoot and stayed barefoot since — a cathartic tribute for an artist who did not get his due.

The exhibit at the Mathaf brings forth a different side of Husain. Curator Hoskote describes the show, titled M. F. Husain: Horses of the Sun, as “introspective rather than a retrospective.”

A walk-through of the exhibit takes us through Husain’s mind, exploring his idea of home as a habitat remembered from childhood, shaped in the present or discovered through exploration. It has images of his engagement with the world, a wider theme that cuts across boundaries and imaginations.

There is a universality in the spirituality Husain espoused and one that is very evident in this exhibit. There is a pluralistic approach to the divine and cosmic aspects of being, articulated through the myths, symbols, narratives and conversations of and between the world’s religions and philosophies.

You see strands drawn from parts of his life, from things he has known and things he has seen — even literature he has read, a dose of calligraphed verses of poetry we assume he lived by.

Just like the India he so loved, his life is a treasure trove of cultures, homes, sentiments, faiths and myths all embodied in his work.

“India is a giant circus and I am its rangeela [colourful] joker!”

Take life with you, take creation with you.
If you have to keep moving, take the whole world with you.

This piece was first published in Dawn here.