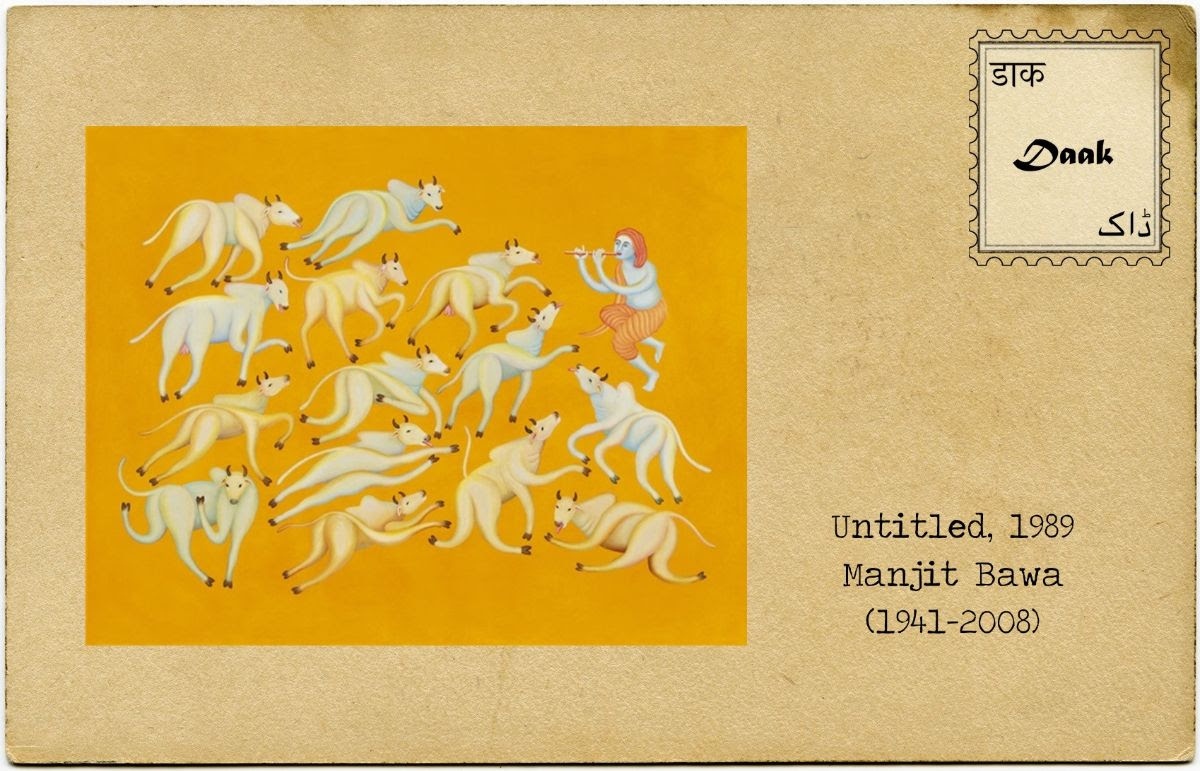 Few artists can encapsulate a multitude of rituals and traditions through their use of colour alone. It is for this reason that Manjit Bawa’s paintings evoke a visceral reaction. His unabashed use of shocking colours like red, yellow and orange create a multi-sensory experience redolent of many sounds, stories, myths and memories.

Born in a small Punjabi town of Dhuri in 1941, Bawa’s parents discouraged his artistic tendencies. However, with the support of his brothers, he made his way to the School of Art in New Delhi, where his teachers included renowned artists such as Somnath Hore, Rakesh Mehra, Dhanaraj Bhagat and B.C. Sanyal. Under the tutelage of Abani Sen in particular, he learned to develop a unique artistic vocabulary and the symbolism that came to define his work.

After a brief stint in Britain as a silkscreen printer, he returned to India and in his own words “faced a crisis” as an artist. He sought inspiration in sufi songs, zen koans, bhakti poems and mythological stories. He says, “I had been brought up on stories from the Mahabharat, the Ramayan, and the Puranas (Hindu mythological and sociological texts), on the poetry of Waris Shah (a Punjabi poet) and readings from the Granth Sahib (holy book of the Sikhs).”

But when art toys with faith, it is bound to stir up controversies. Several of his paintings were misinterpreted and angered people of various faiths. The painting below was interpreted as Lord Krishna playing his flute for dogs. But Bawa insisted that the protagonist was not Krishna but Ranjha, the tragic hero of the Punjabi love poem ‘Heer-Ranjha’ written by Waris Shah.

He says, “The dog is anti-Hindu and anti-Muslim both. Showing the dog is antireligion. “ He adds that a couplet from the poem – “Nobody would listen to my flute; I’ll play for the dogs” – served an inspiration for the poem.

Perhaps this is why Bawa left his works untitled.

Bawa’s works often draw from faith and mythology with added elements of fantasy. Although he creates grotesque figures that have little resemblance to real people, his paintings are alive with action and movement.

In contrast, he claims that the process of making these paintings is “very slow and steady”. He adds, “Dealing with painting can be very boring if one doesn’t understand the detail. People sometimes put in colours and they don’t work, because they haven’t lived with those colours. They’ve never lived with them. Each colour, each form, has to be experienced first and not merely over-detailed.”

You can see more of Manjit Bawa’s art HERE