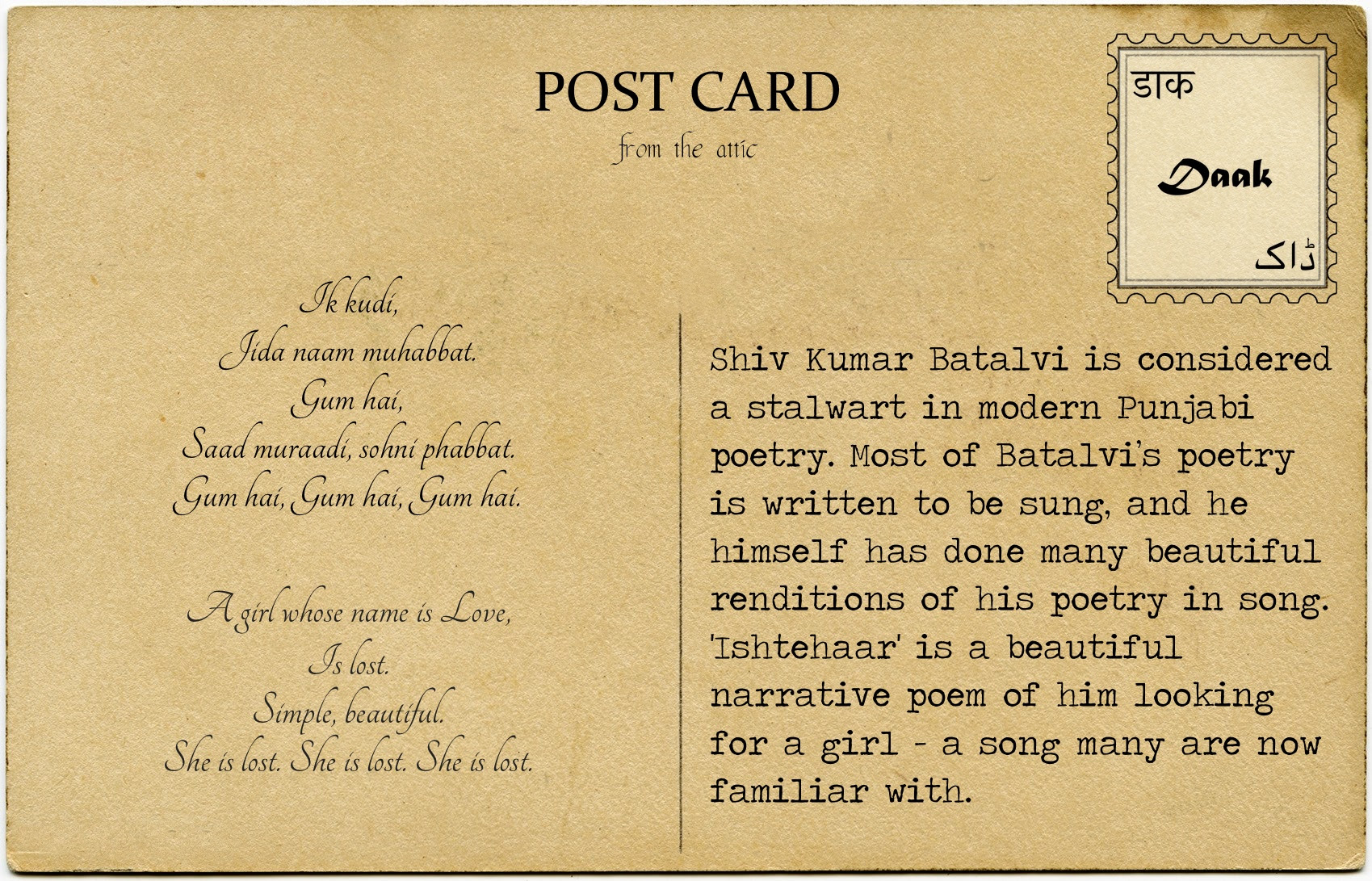 Shiv Kumar Batalvi is considered a stalwart in modern Punjabi poetry. A quick web search tells you that he is the poet of lament and the internet is quick to define pathos as his genre. However, his writing is as much about true love and passion as it is about the agony it necessarily brings.

In 1967, Batalvi became the youngest recipient of the Sahitya Akademi Award for his epic verse play, ‘Loona’, in which he retold a popular folk legend. A young girl is married to the father of Puran Bhagat, a pious saint. Despite him being her stepson, she is attracted to him and confesses her feelings only to be rejected. Legend has it that after this rebuke, she connives to have him exiled. However, Batalvi tells the story from Loona’s perspective, spinning the tale into one where the otherwise villainous woman becomes the narrator.

Much of Batalvi’s poetry is written to be sung, and he himself has done beautiful renditions of his poetry in song. Many stories and legends surround his romantic life. It is said that he fell in love with several women and his poetry springs from the dejections and sorrows these liaisons brought. However, this is a claim he has denied. You can watch him talk about this in an interview here, offhandedly denying these rumours and saying that he never quite accepted the love he got.

One of these love poems was inspired by a woman who married someone else. After the birth of her first child he is said to have written a poem titled ‘Main Ek Shikra Yaar Banaya’ (I fell in love with a hawk) that has the following lines.

O my mother, I made a hawk my beloved,
A plume on his feet,
Bells on his feet!

There were flames coming out from the body,
My hand were burnt!
I crush food for him,
But he never ate!
So I fed him with flesh of my heart!
He took such a flight,
That he never returned back!
O my mother, I made a hawk my beloved

The next poem is a beautiful narrative about him looking for a girl. We have all become familiar with it because of its recent renditions in movies but at its core, it is said to be inspired by yet another woman he fell in love with, but who moved cities early in his youth. You can also listen to an intoxicating recitation of this poem in his own voice here.

A girl whose name is Love
Is lost.
Simple, beautiful,
She is lost.
Her beauty, ethereal
Virtuous, like Mary,
Her laughter, blossoms falling,
Her gait, a poem.
Tall as a cypress,
Barely alight,
Yet she understands the language of a glance.
It has been ages since she was lost
Yet it feels like yesterday,
It feels like today.
It feels like now.
She was standing beside me just now,
She is beside me no more.
What deception is this? What trickery?
I am bewildered.
My eyes examine every passerby,
Scanning their faces,
Searching for that girl.
When evening descends upon the bazaar
And perfumes erupt at every corner,
When restlessness and tiredness
Collide with leisure,
Isolated in that noise,
Her absence eats at me.
I see her
Every moment I feel as though –
Every day I feel as though –
From this throng of people,
From this crowd of doors,
She will call out to me,
I will recognize her,
She will recognize me.
But from this flood of noise
Nobody calls out to me,
Nobody looks toward me.
But, I don’t know why I feel
Indistinctly, obscurely,
Every day, through every crowd,
As though her form moves past me
But I am not able to see her.
I am lost in her face
And stay lost in it
I keep dissolving in this grief.
I keep melting in this grief.
I beg this girl, for my sake,
I beg her for her own sake,
I beg her for everyones sake
I beg her for the sake of this world,
I beg her for the sake of God,
If somewhere she reads or hears this
Whether she be alive or dying
That she come and meet me once
That she not stain my love.
Else I will not be able to live,
I will not be able to write a song.
A girl whose name is Love
Is lost.
Simple, beautiful,
She is lost.

Translation of poems by Speaking Tree