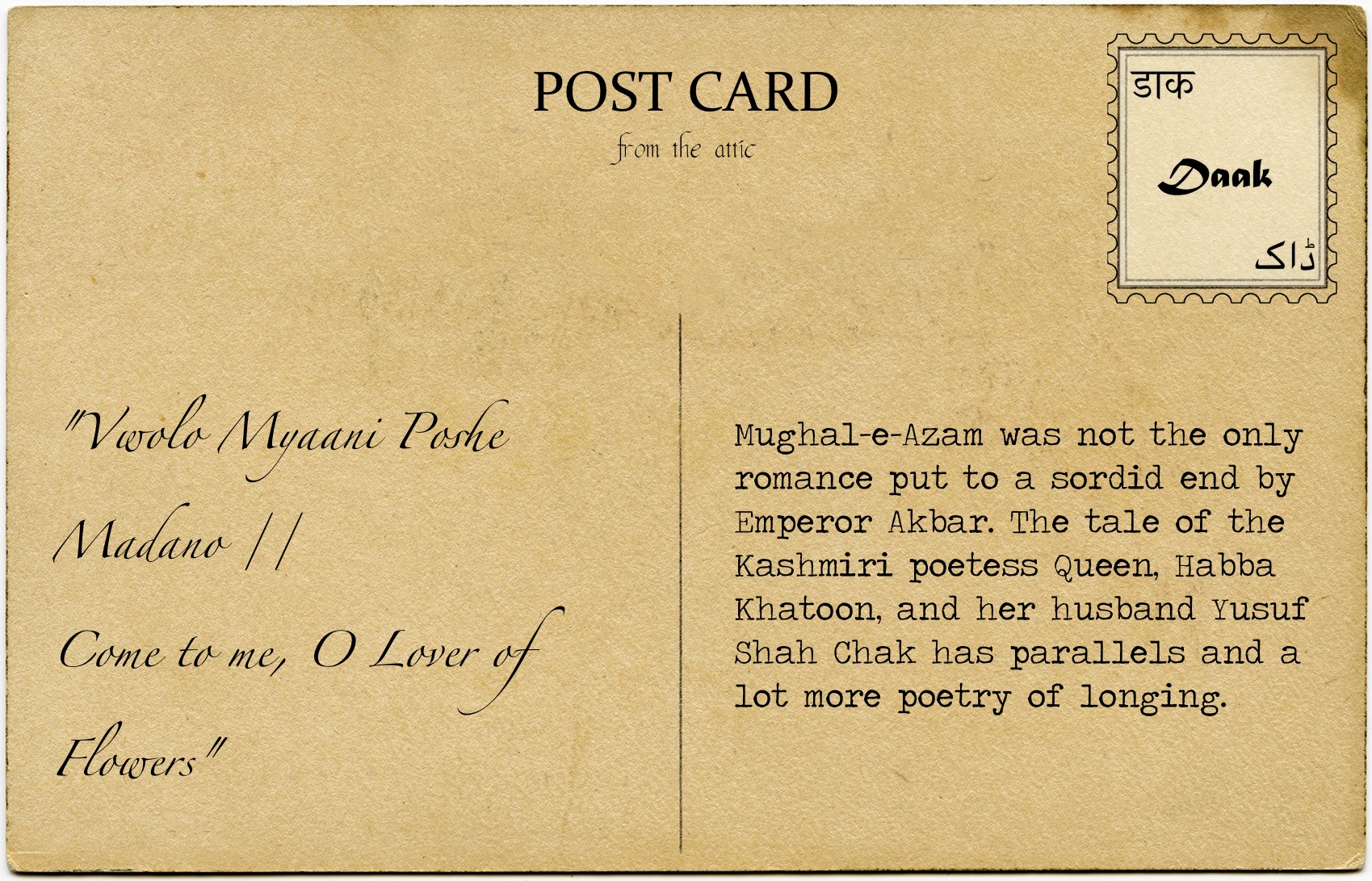 Mughal-e-Azam tells us a tale contrary to the otherwise glorious accounts of the Mughal Emperor Akbar. It tells us a heart-wrenching story of a blooming romance between a courtesan and the Prince, and how at the orders of the Emperor, an end was put to it. Although the veracity of it is doubtful, like all legends, it survives and is retold. However, this isn’t the only romance that Akbar put a premature end to. There is yet another epic, often told and retold in Kashmiri folklore that doesn’t find mention in popular narratives. This romance too, was throttled by Emperor Akbar for conquest of the crown jewel of the Mughal Empire, Kashmir.

Habba Khatoon was a Kashmiri poetess in the 16th century, who Yusuf Shah Chak, king of Kashmir, spotted one day in the fields. He fell in love with the beauty of her voice and richness of her rhyme. He is said to have relieved her of her earlier marriage and taken her away to his court where she enchanted him with her poetry while reigning as queen for six years. At the end of these six years, Yusuf Shah was summoned to Delhi by Emperor Akbar. Akbar had failed to conquer Kashmir militarily had now resorted to tactics of cozenage. Upon reaching the Mughal court, Yusuf Shah was flung into prison, never to see the light of day again; never to see Habba again. For the rest of her years, Habba pined away in an abode next to the Jhelum where she finally lay to rest.

With summer steadily on the wane, These champa flowers soon may wither

O bulbul, be here before they fade! Enjoy my pomegranate blossoms!

There exists little documentation and fewer records of the story of Habba Khatoon and Yusuf Shah Chak, yet legend has passed this story down for generations and it slowly yet inevitably found its way into historical records and books of lore. Her poetry is thick with metaphors of nature, laden with references to flowers, spring and Kashmir, and weighed down by the longing for her lover. Her poetry which has been sung beautifully across generations and translated, is only a tad as glorious as the original Kashmiri but you can read a collection here.

The distant meadows are in bloom, have you not heard my call?

Flowers bloom on mountain lakes, the upload meadows all us loud

The lilac blooms in distant woods, have you not heard my call?