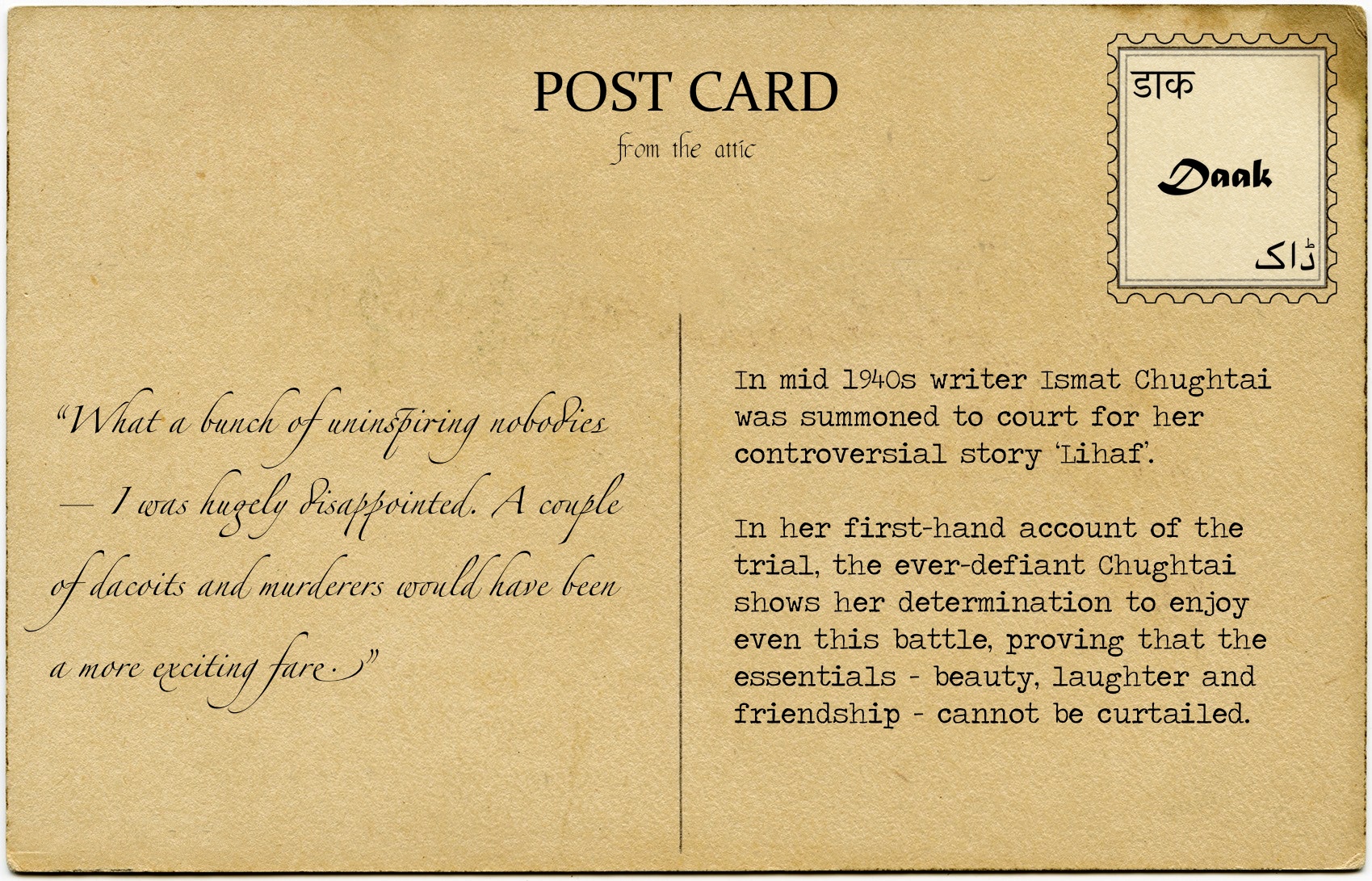 Humour has a long-standing relationship with defiance; satire and irony have launched as many revolutions as bullets and missiles. And yet, there is a different kind of humour–a harmless, light-hearted mirth—which does not seek to attack or gain victory. It seeks only to celebrate life and its simple pleasures.  Ironically, the very existence of this kind of humour becomes a powerful act of defiance, a message to the oppressors that the essentials such as beauty, laughter and friendship can never be curtailed.

Ismat Chughtai’s account of her obscenity trial embodies this kind of mirth. Along with writers such as Saadat Hasan Manto and Faiz Ahmad Faiz, Chughtai was at the forefront of the Progressive Writers Movement which sought to attack social injustice and backward practices through Literature. Both Chughtai and Manto had come under fire for their stories “Lihaf” and “Bu” respectively, and were summoned to court in Lahore. Chughtai recorded this experience in great detail in an essay titled simply “The Lihaf Trial”.  Even as she is escorted by policemen to jail, she retains her sense of humour and says:

What a bunch of uninspiring nobodies—I was hugely disappointed. A couple of dacoits and murderers would have been a more exciting fare.

Despite her bravado, Chughtai was shaken up by the notoriety brought upon by this story. She often received anonymous letters full of “profanities” and “insults” directed both at her and her family. She says:

I would open a letter gingerly and if I glimpsed the dreaded snakes and scorpions, I would read it quickly and burn it immediately.

Not one to be subdued, however, Chughtai remains true to her creative impulse saying, “[m]y mind tempts my pen and I’m unable to interfere in the matter of my mind and pen.”

Her essay dwells as much on the proceedings outside court as the trial itself–her camaraderie with Manto, the banter with her concerned and outraged family members, and excursions into the heart of Lahore. Her only regret at the end of the trial is that she may not get to visit Lahore again.

How beautiful Lahore was. Still invigorating, full of laughter, its arms spread out in welcome, embracing all those who arrive here, a city of cheerful people who love unconditionally, without reserve, the ‘heart of the Punjab.