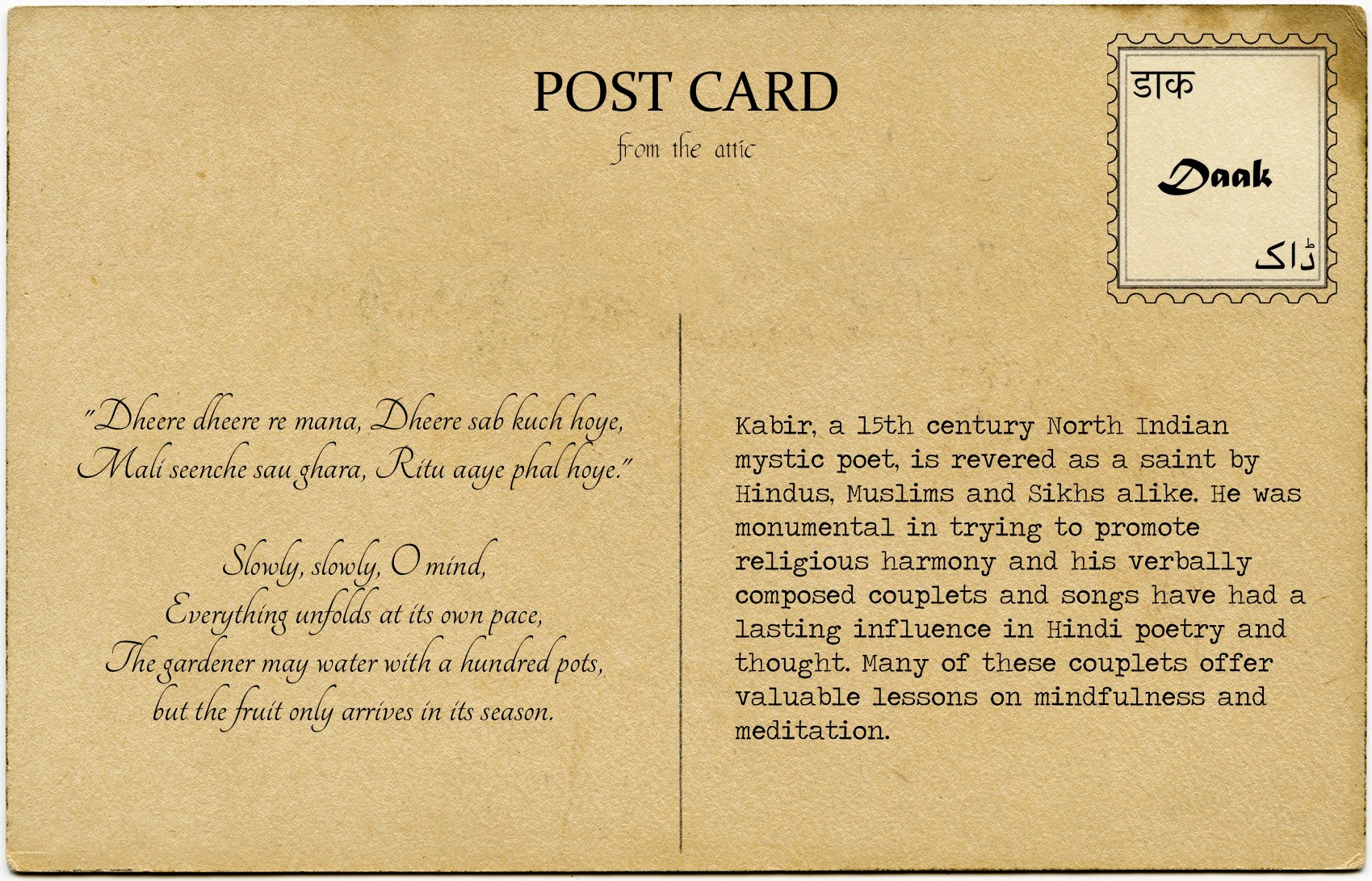 Kabir, a 15th century North Indian mystic poet, is revered as a saint. Hindus, Muslims and Sikhs alike have claimed him and honoured him with names they understood for sainthood. He was monumental in trying to promote religious harmony in Northern India and legends of his birth and death both conform to this ideal. Few details of his birth are known with certainty but what lives is a mystical and fantastic legend. The most common account says that he was born a Hindu and abandoned as a baby in a basket floating in a pond. He was found and raised by a family of Muslim weavers. Raised as a Muslim in his early life, he grew to be heavily influenced by Hinduism and spent his life searching for the “true God”. At his death, when Hindu and Muslim devotees fought over whether to bury or cremate him, it is said that the corpse turned into a bunch of flowers that each group took away to perform last rites according to their tenets.

Kabir recited his poems for common people in their own vernacular, Hindi, often borrowing from local dialects. His verbally composed couplets and songs have since been recorded and although not always accurately attributed, they have had a lasting influence in Hindi poetry and thought. From his vast repertoire, we bring you a selection of verses that capture his lessons on mindfulness and meditation.

Where are you looking for me, O seeker? I am right next to you.
I am neither in goat nor in sheep neither I am in the knife or sword.
I am not in the skin, in the tail, in bones or meat.
I am neither in the temple nor in the mosque. I am not in the Kailash mountains or in the Kaaba.
I am not in the deeds of the material world nor in renunciation.
I am found in one moment’s search, If a seeker were to seek.
I am outside of the city, I live in the fort.
Says Kabir– listen carefully, God is within the breath of every breath.

This poem is laden with references to rituals, sacrifices and pilgrimages that do not necessarily lead to divine realization, and therefore, he suggests an alternate path:

Just as mustard seed bears oil, and a spark carries the essence of fire,
Your Lord lies within you, awaken him if you can.

Slowly, slowly, O mind,
Everything unfolds at its own pace,
The gardener may water with a hundred pots of water, but the fruit only arrives in its season.

Moving from the divine to the worldly, Kabir teaches us how to maintain the value of objects and relationships:

It is familiarity and proximity that introduces distaste, irreverence;
Just like the women of Mayagiri who use sandalwood as firewood.

Finally, we leave you with this famous couplet which many a parent has used since, well, the 15th century:

Finish tomorrow’s tasks today,
And today’s tasks right now.
When would you finish them,
If the world were to end the next moment?

Find more of Kabir’s poetry along with translations here. If you are looking for a copy of translated works, click here.