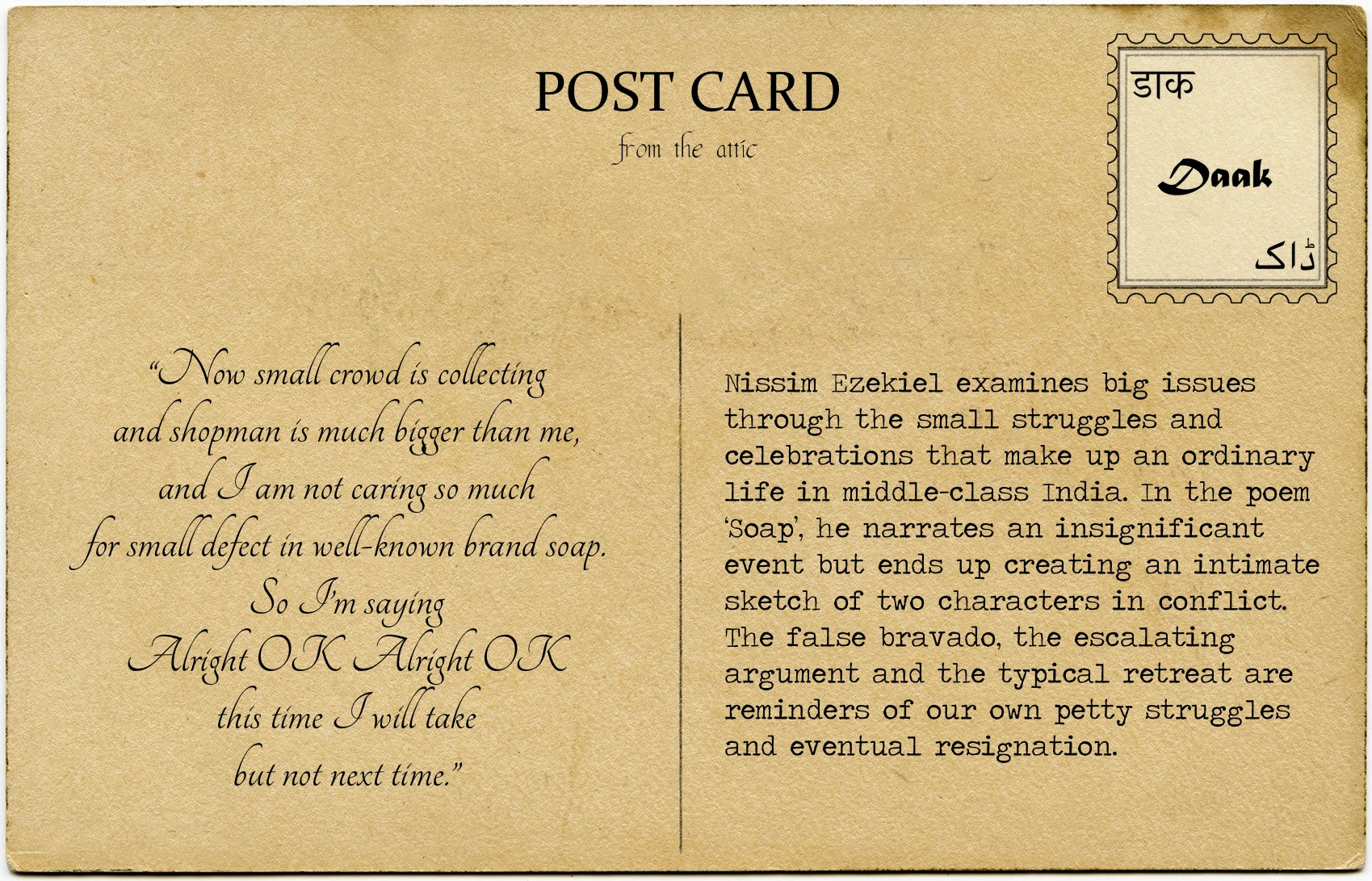 Nissim Ezekiel (1924 – 2004), an Indian born poet of Jewish descent, has often been referred to as the “father of post-independence Indian verse in English”. Two of his most well-known poems, ‘The Night of the Scorpion’ and ‘The Professor’, have become standard inclusions in the Indian school curriculum.

Through his simple and terse compositions, Ezekiel highlights social problems in a country gradually coming into its own. He examines big issues through the small struggles and celebrations that make up an ordinary life in middle-class India.
His poems have a delightful touch of humour, often parodying the Indian-English style of speaking. In the poem ‘Soap’ for instance, he narrates an insignificant event but ends up creating an intimate sketch of two characters in conflict. The false bravado, the escalating argument and the typical retreat – “this time I will take/ but not next time”—are all reminders of our own petty struggles and eventual resignation.

Some people are not having manners,
this I am always observing,
For example other day I find
I am needing soap
For ordinary washing myself purposes.
So I’m going to one small shop
nearby in my lane and I’m asking
for well-known brand soap.

That shopman he’s giving me soap
but I’m finding it defective version.
So I’m saying very politely — –
though in Hindi I’m saying it,
and my Hindi is not so good as my English,
Please to excuse me
but this is defective version of well-known brand soap.

That shopman is saying
and very rudely he is saying it,
What is wrong with soap?
Still I am keeping my temper
and repeating very smilingly
Please to note this defect in soap,
and still he is denying the truth.

Now small crowd is collecting
and shopman is much bigger than me,
and I am not caring so much
for small defect in well-known brand soap.
So I’m saying
Alright OK Alright OK
this time I will take
but not next time.

Another great observational poem is ‘Irani Restaurant Instructions’. If you have ever eaten at these cramped and fragrant cafes with eccentric owners and servers, this poem is sure to make you nostalgic for their delicious food and old-world charm.

Please
Do not spit
Do not sit more
Pay promptly, time is valuable
Do not write letter
without order refreshment
Do not comb,
hair is spoiling floor
Do not make mischiefs in cabin
our waiter is reporting
Come again
All are welcome whatever caste
If not satisfied tell us
otherwise tell others
GOD IS GREAT

You can read some of his other poems here. We particularly recommend ‘Jewish Wedding in Bombay’!