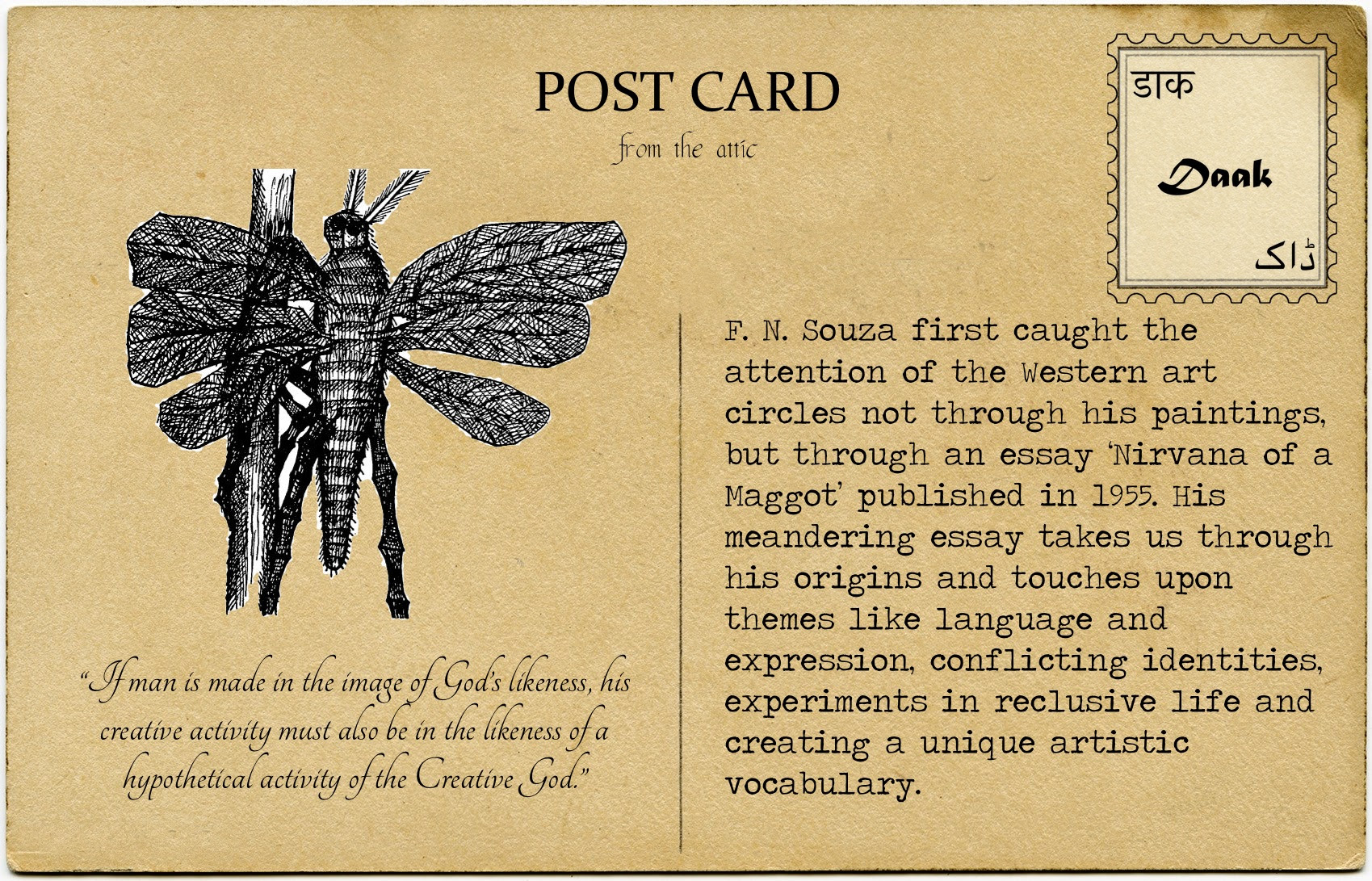 An Artist’s Vocabulary: F. N. Souza’s ‘Nirvana of a Maggot’

Francis Newton Souza (1924 – 2002), often referred to as F. N. Souza or just Souza, is one of the most well-known Indian artists in the West. Interestingly, he first caught the attention of the American art circles not through his paintings, but through an essay ‘Nirvana of a Maggot’ published in Stephen Spender’s Encounter magazine in 1955. Spender introduced Souza to the famous art dealer Victor Musgrave, who launched Souza’s very first exhibition (which was completely sold out) and subsequently, a long and prolific career.

In ‘Nirvana of a Maggot’, Souza traces the journey of a humble maggot (a euphemism for himself) as it grows and changes shape. Souza’s delightfully meandering essay takes us through his origins—a “blooming maggot on a dung heap”—to the man he has become. In between, he touches upon themes like language and expression, conflicting identities, experiments in reclusive life and perhaps the most important question for any artist: how to authentically give voice and shape to their unique experience of life. The essay begins with Souza’s escape from the “monstrous civilization” into a small, unassuming village:

“I spent nearly four months happy as a barbarian in this little village. I patted the earth and thanked heaven that there was at least a small plot of land left on this planet which had not been poisoned by our ghastly civilisation, if it can still be called that, with its mechanised fangs which were simply and surely sucking the life out of us.” As he goes through the motions of life in this small village, he examines his ideas about expression and articulation, first through language and then through the medium of art. As he explores the brush strokes of the creator, he is inspired to create a unique vocabulary for his own creations.

“If you ask God to show you the cause of His whole Creation, this infinite universe, the entire cosmos, you will see that the cause itself is not as big as the Creation, in fact, it is something very small, for He will show you in the palm of His hand a tiny little thing which could perhaps be a drop of water, a speck of some sort, a nucleus maybe, or a germ of some kind…In the same way, my own activity in matters of paints and words, I am trying to make one of creation within Creation. My drawings and paintings, for instance, are made of a little structure: two parallel lines crosshatched on either side, e.g. All my work—still-lifes, landscapes, portraits, and compositions are based on this principle, or perhaps it is a drop of water or a germ of some sort, because, if man is made in the image of God’s likeness, his creative activity must also be in the likeness of a hypothetical activity of the Creative God.”

Souza also intersperses this essay with interesting, observational sketches of insects, scenes of domestic life and local characters, which demonstrate his philosophy.

You can read the full essay here.