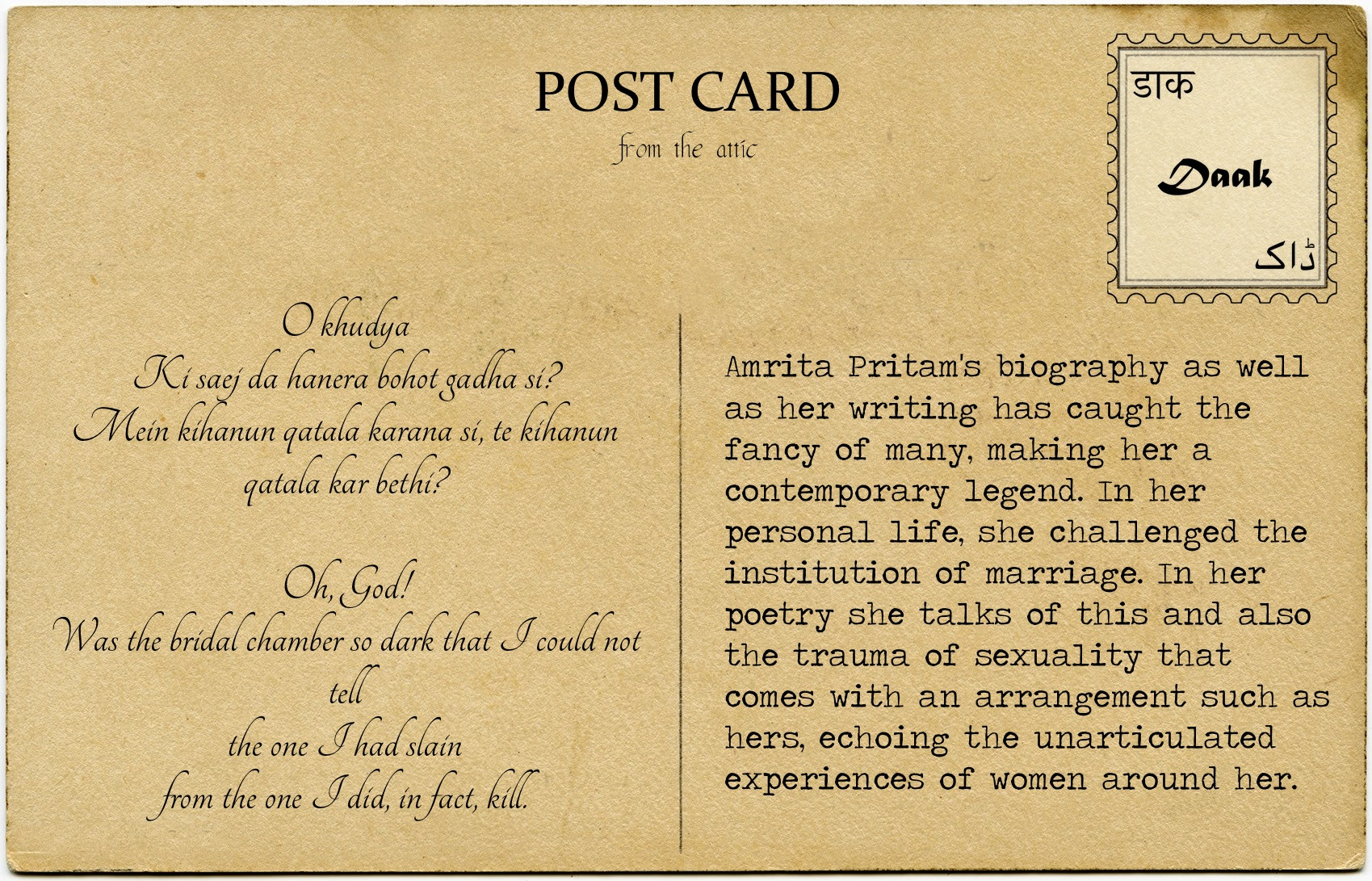 Reading Amrita Pritam today is a rare delight; at a time when women who express desire are killed in the name of honour, and men are murdered for loving across religions, to think that a Sikh poetess could express unabashed affection for a Muslim man fifty years ago, is incredible.

Amrita Pritam may be best known for her poems that talk of undying love and lament the gruesome effects of partition. Yet, the very life she lived was unconventional and extraordinary – a life of rebellion and defiance. She possessed and flaunted a courage that few can display in a hostile society, and articulated feelings in a timeless voice that still echoes in both Punjabs and beyond.

That was our tryst, yours and mine
We slept on a bed of stones
And our eyes, lips and fingertips,
Became the world of your body and mine
They then made translations of this first book
The Rig Veda was compiled much later.

*An excerpt from her poem ‘Kufr’, translated into English by Hari Sharma.

Pritam’s biography as well as her writing has caught the fancy of many, making her a contemporary legend. In her personal life, she challenged the institution of marriage. In her poetry she spoke of this and also the trauma of sexuality that came with an arrangement such as hers, echoing the unspoken experiences of many women around her. Now, when conversations around consent and sexuality are widespread, Pritam’s poetry comes in handy to understand these notions. In this particular poem, Pritam speaks of a virgin’s first sexual experience and likens it to self-annihilation.

Virgin
When I entered your bridal chamber
I was not one but two persons.
One’s marriage had consummated and complete
the other had remained a chaste virgin.
To fulfill our union
I had to kill the virgin.
And kill her, I did.
Such murders are sanctioned by the law
Only the humiliation accompanying them is illegal.
So I drank the poison of humiliation.
Came the dawn and
I saw the dawn
and I saw the blood on my hands.
I washed them
Just as I washed off the odors on my body.
But when I saw myself in my mirror,
there she was before me;
The same one I thought I had
murdered during the night.
Oh, God!
Was the bridal chamber so dark that I could not tell
the one I had slain
from the one I did, in fact, kill?

Pritam asserts that the destruction of the self is necessary in a woman’s first sexual experience, without any space for the humiliation it entails. This bold poem not only talks about a universal female experience but also grapples with its unexpressed trauma at a time when it was not openly discussed.

Pritam became the first female poet to receive the Sahitya Akademi Award and a large body of her work around the partition is constantly re-imagined in different mediums. However, her most provocative poems, such as this one, often don’t make their way into conversations around femininity and feminism.
Listen to Amrita Pritam’s poems in her own voice here. You can also listen to our readings of Amrita Pritam’s poems for Himal Southasian here.