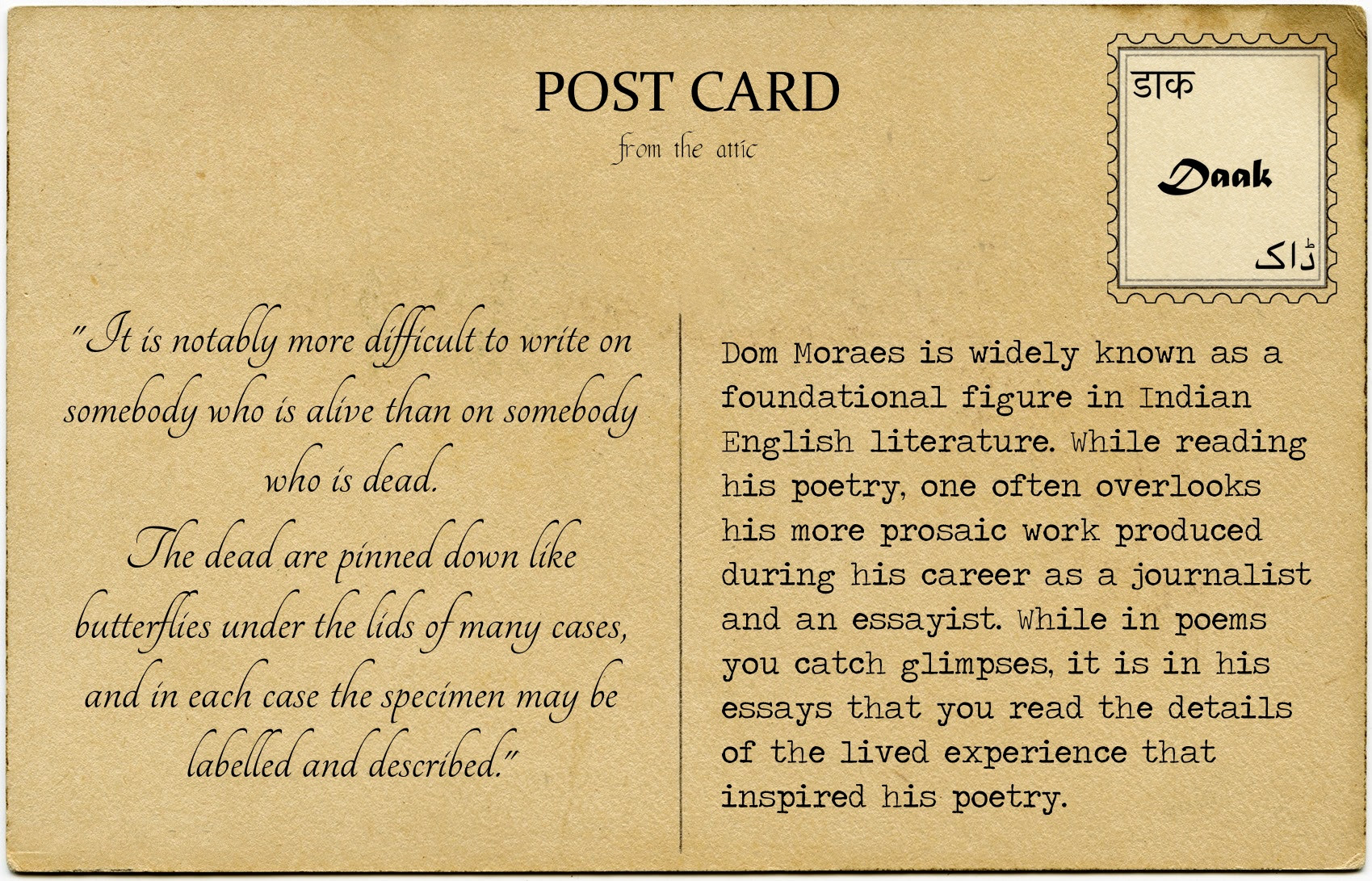 “Groping through a giant haystack”: Dom Moraes’ Musings on Writing about People

Dom Moraes is widely known as a foundational figure in Indian English literature. He was an editor, essayist, scriptwriter and journalist apart from being an extraordinary poet – for which he is best known. His poems are possibly his most prolific work and his gift lay in his ability to capture unexpressed thoughts in verse. In one such poem, he talks of absences.

Absences
Smear out the last star.
No lights from the islands
Or hills. In the great square
The prolonged vowel of silence
Makes itself plainly heard
Round the ghost of a headland
Clouds, leaves, shreds of bird
Eddy, hindering the wind.

No vigils left to keep.
No enemies left to slaughter.
The rough roofs of the slopes,
Loosely thatched with splayed water,
Only shelter microliths and fossils.
Unwatched, the rainbows build
On the architraves of hills.
No wounds left to be healed.

No sound would be heard if
So much silence was not heard.
Clouds scuff like sheep on the cliff.
The echoes of stones are restored.
No longer any foreshore
Or any abyss, this
World only held together
By its variety of absences.

While reading his poetry, one often overlooks his more prosaic work produced during his career as a journalist and an essayist. His personal essays are especially remarkable. While in poems you catch glimpses, it is in his essays that you read the details of the lived experience that inspired his poetry. In a collection of essays titled ‘Where Some Things Are Remembered: Profiles And Conversations’, he captures the essence of people he knew with remarkable openness. For instance, while profiling his father, Frank Moraes, he lays bare his experience with his mother’s mental illness. To let out something so intensely personal and guttural with such eloquence is characteristic of Moraes.

Full of profiles and conversations, the book begins with a passage written by Moraes in 1980. It is a passage on writing about people. This musing promises a valuable read for those of us who wish to document people – the ones we know and the ones we strive to know through sources other than our own accounts.

“All history is a corridor of mirrors, in which adventitious images are recorded for posterity to accept or not to. All these images are to some extent distorted, not so much because of flaws in the mirrors as because of the enormous misconceptions that exist between person and person and between person and event. It is notably more difficult to write on somebody who is alive than on somebody who is dead. The dead are pinned down like butterflies under the lids of many cases, and in each case the specimen may be labelled and described. The researcher simply has to sift through the crumbled, lifeless squares of paper, select those which form some kind of pattern relevant to his own preconceptions, and there he is, his views in his head and the source material to support them at his elbow. When the people a writer is concerned with are alive, there is no question of neatly labelled, perpetually skewered specimens: groping through a giant haystack, he occasionally, and sometimes rather painfully, pricks his questioning finger on a needle. His hand may be septic in the end: but out of these myriad tiny pinpricks his book will be made.”
Dom Moraes 1980

You can read more in the forthcoming book “Where Some Things Are Remembered: Profiles And Conversations – Dom Moraes”, edited by Sarayu Srivatsava.

Find a web link here and buy the book here.