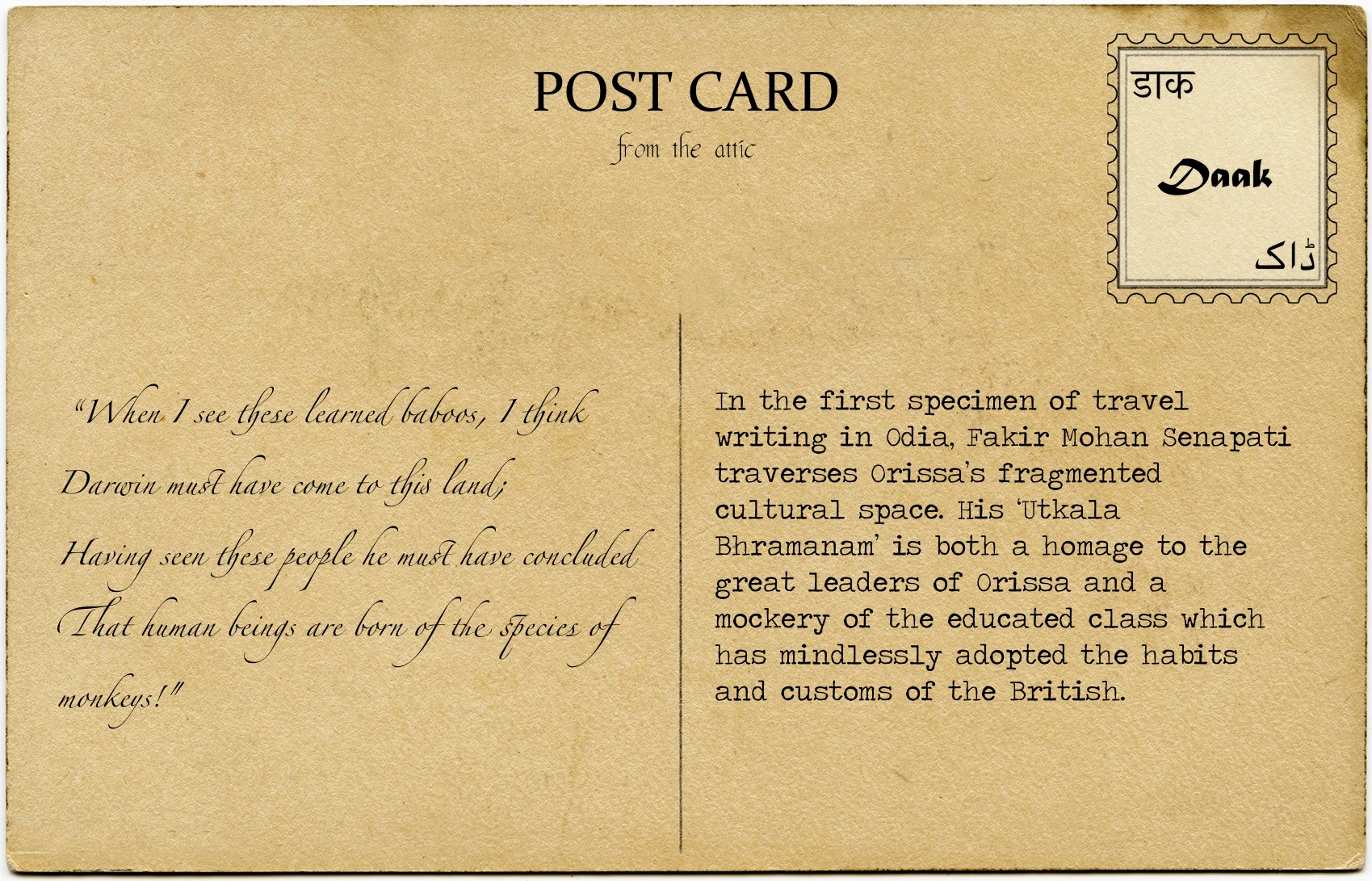 The very first specimen of travel writing in Odia, ‘Utkala Bhramanam’ (Utkal-ancient name for Orissa and Bhramanam-tour) was, in fact, not a travelogue at all.

In his first ever published work, Fakir Mohan Senapati does not recount experiences from his journey through Orissa, as the poem’s name suggests. Rather than a literal journey, the poem traverses Orissa’s cultural space in a provocative and irreverent fashion. Senapati both mocks and pays homage to ordinary people as well as the Mahajana (great individuals), British administrators, kings, zamindars, writers, poets, philanthropists, and scholars, thereby, uniting a socially fragmented Orissa.

Even at the outset, his invocation of Goddess Sarla challenges many social and literary norms of the time. His audacious and witty lines  leave us wondering whether his audience was as appalled and amused by his writings.

“Please, O Mother, sit on my head for a while

I will write poems which people of Utkal will sing.

You have the habit of sitting on the throat of poets

Please don’t inflict such torture on me

My voice would become hoarse if you sat on my throat

Then how would I write my poem?

So my head doesn’t bow down under your weight;

Mother Sarla, I have no knowledge in my stomach

If your hands and legs break

O dark-hued One! Don’t blame me then!”

Bhaktakabi Madhusudan Rao. His celebration of local heroes, however, is equally balanced with the shaming of the new-generation of English-educated Odias. Senapati picks on everything from their choice of food to their diction, clothes and toilet habits. The poem, although biting and sarcastic, is oddly nostalgic for Indian traditions and a simpler way of life. This mockery then, perhaps, was an appeal to the natives to take pride in their own national and cultural identity.

“When I see these learned baboos, I think

Darwin must have come to this land;

Having seen these people he must have concluded

That human beings are born of the species of monkeys!

[You] don’t wash yourself after defecating in the fields

You put on black coats in the terrible sun

You put on waistcoats and speak in English

You urinate standing, and don’t brush your teeth!