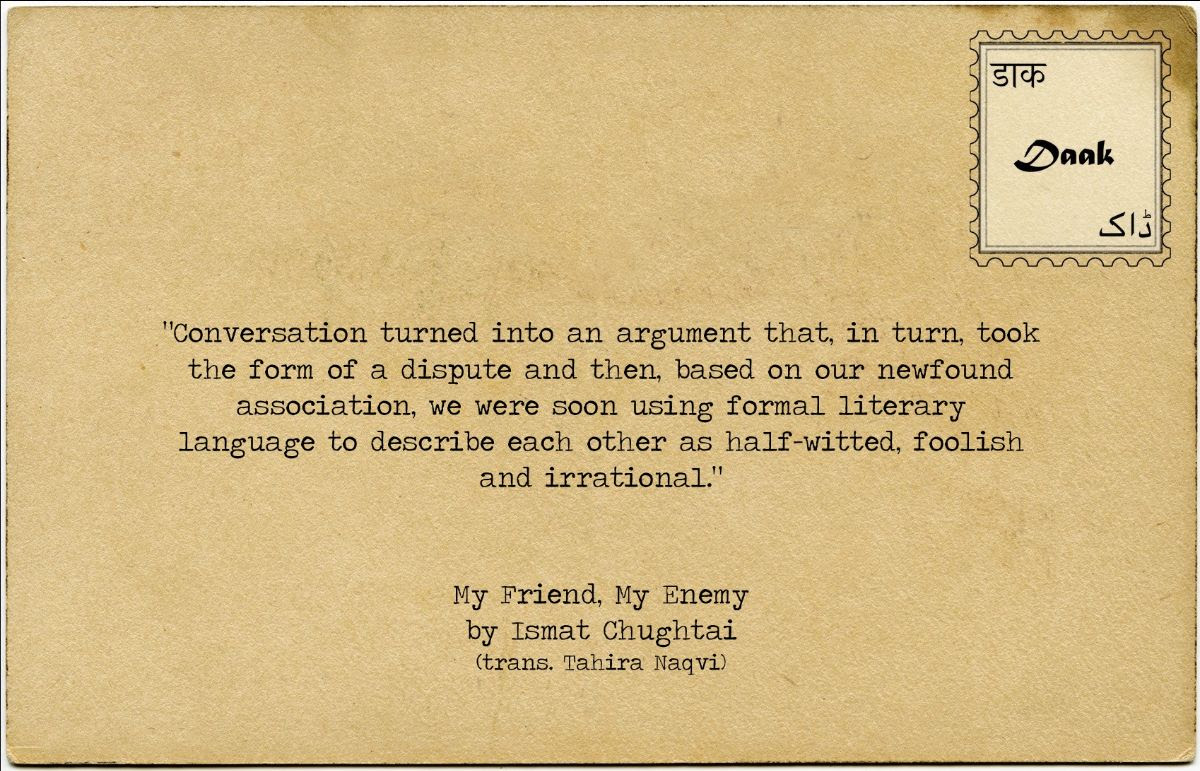 A Troubled Friendship with Manto: Ismat Chughtai’s Essay, My Friend, My Enemy

As we weather the storms of life, our friendships evolve in different ways; they either ripen or sour in degrees as we uncover the brilliant or unsavory facets of our friends’ personalities. What remains unchanged, however, is the impact of this relationship on our own life and personhood. The remarkable friendship between the two darlings of literary controversy, Ismat Chughtai (1915 – 1991) and Saadat Hasan Manto (1912 – 1955), was no different.

Through literary and commercial success, court cases, births, deaths and migration, they held each other in a sort of critical fondness, the kind we reserve for those closest to our hearts. In her essay “My Friend, My Enemy”, Chughtai reflects on her troubled friendship with Manto and pays tribute to her closest intellectual ally whom she loved and hated in equal measure.

The essay begins in Chughtai’s characteristic style poking fun at both the situation and the characters involved. To overcome her “anxiety” at meeting Manto (who was already notorious for his incisive tongue) for the first time, she immediately adopts the strategy of quick retaliation, thereby establishing herself as his equal.

Manto: “Arre, I thought you would be sort of dark, skinny and sickly-looking.”

Chughtai: “And I thought you would be a loud-mouthed, overbearing Punjabi.”

Their conversations oscillate between serious philosophical concerns and crude, mundane matters. What remains constant is a call and response–an intellectual ping pong that allows them to test their ideas and theories against a loving yet unforgiving critic.

Whenever Manto and I decided to meet for five minutes we ended up being together for five hours. Having an argument with him was like sharpening one’s intellect; it was as if the cobwebs were being cleared, the brain swept clean with a jharu.

They even become good friends with each other’s spouses to the extent that Chughtai considers her friendship with Manto’s wife, Safia, to be “stronger and more enduring”.  Manto often turns to Chughtai’s husband, Shahid, to resolve conflict and restore peace.

As their friendship deepens, Chughtai develops a deep respect for the brilliance, complexity and contradictions in Manto’s art.

He looks for pearls in excrement, in every abandoned dung heap of the world, because he doesn’t trust those who would reform it, doesn’t trust their intellect and judgment. He pounces upon the intruders hiding in the hearts of honourable and virtuous females, and compares them with the piety in the heart of the prostitute from the kotha. He finds the squalid washerwoman more sweet-smelling than the bride drenched in perfume.

However, she is not immune to his imperfections. His alcoholism and stubborn pride frustrates her and she worries that their bitter fights will “surely break the bonds of friendship”. The final straw is Manto’s sudden departure to Pakistan in anticipation of the Partition. Although he leaves without saying goodbye, he writes several letters urging her and Shahid to follow. Chughtai is touched by his entreaty but also angry that he doesn’t understand or respect her decision.

Gradually, Manto’s ruin begins to unfold in his sporadic letters; he is broke, jailed and eventually admitted to a mental institution. Chughtai witnesses his undoing with a great degree of sadness and remorse, bemoaning her own role in the eventual demise of her greatest friend-enemy.

Those who die inflict a wound that neither aches nor bleeds; it just smoulders quietly forever.

You can find a collection of essays by Chughtai including “My Friend, My Enemy” here.