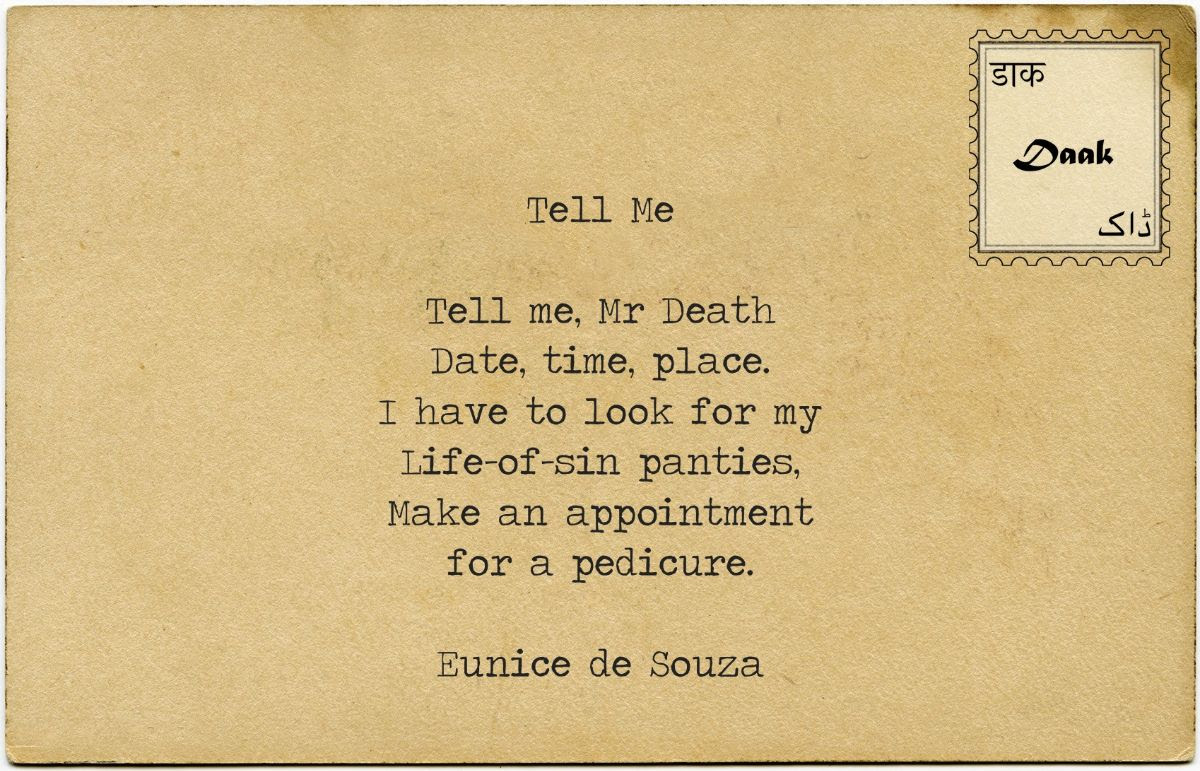 There is a strange comfort in reading the poems of Eunice de Souza, particularly on days that bring despair and isolation. In her razor-sharp, no-nonsense style, she articulates a fiercely independent code of survival that defies convention. In fact, her poetry not only invites, but also celebrates the misfits – boisterous children and snarky adults who resist being molded into the mundane.

I like to visit you, you say,
You’re always calm and smiling,
(But the visitor does not know many facts)
Should I tell I wonder,
I was a burly little girl
who knocked her sissy cousins down?

No matter that
my name is Greek
my surname Portuguese
my language alien
There are ways
of belonging
I belong with lame ducks.

Eunice de Souza (1940–2017), one of India’s most well-known modern poets, was born and brought up in Pune, in a Goan Catholic family. After completing her education, she taught English at St. Xavier’s College, Mumbai, where she was loved and feared in equal parts. With her sharp tongue and trenchant views, de Souza could reduce even the boldest personalities to a bundle of nerves. In ‘For S. Who Wonders If I Get Much Joy Out Of Life’, her answer is:

As a matter of fact I do.
I contemplate, with a certain
grim satisfaction
dynamic men who sell better butter.
Sometimes I down a Coke
implacably at the Taj.
This morning I terrorized
(successfully)
the bank manager.
I look striking in red and black
and a necklace of skulls.

Like the terrifying Goddess Kali who wears a necklace of skulls, de Souza relishes her ability to terrorize men. But this pride and defiance is hard-won. She often dwells on childhood injustices that crushed her, and ultimately taught her the art of survival . In ‘de Souza Prabhu’, she writes:

I heard it said
my parents wanted a boy.
I’ve done my best to qualify.
I hid the bloodstains
on my clothes
and let my breasts sag.
Words the weapon
to crucify.

She is sensitive to the overt and subtle oppression of women all around her, noting their suffering behind the facades of docile domesticity. In ‘Women in Dutch Painting’, one of her most famous poems, she writes:

The afternoon is on their faces
They are calm, not stupid,
pregnant, not bovine.
I know women like that
and not just in paintings
an aunt who did not answer her husband back
not because she was plain
and Anna who writes poems
and hopes her avocado stones
will sprout in the kitchen.
Her voice is oatmeal and honey.

But de Souza herself is far from these “calm” women, even as a young girl. In ‘Eunice’, she remembers a hateful nun who criticizes her sewing, a markedly feminine skill.

Eunice, Embroidery Sister said:
this petticoat you’ve cut
these seams
are worthy, of an elephant
my dear.

Her retort is unlike any woman in any Dutch paintings: she calls the Embroidery Sister a “silly bra-less bitch”.

De Souza refused to marry or have children. But she wrote several books, inclduing children’s books, directed and acted in plays, and gave shape to ‘Ithaka’, an immensely popular Theatre and Literary festival at the St. Xavier’s College. With a generative and colourful life, it is no surprise that in death, too, she remained a force to reckon with.

Tell me, Mr Death
Date, time, place.
I have to look for my
Life-of-sin panties,
Make an appointment
for a pedicure.