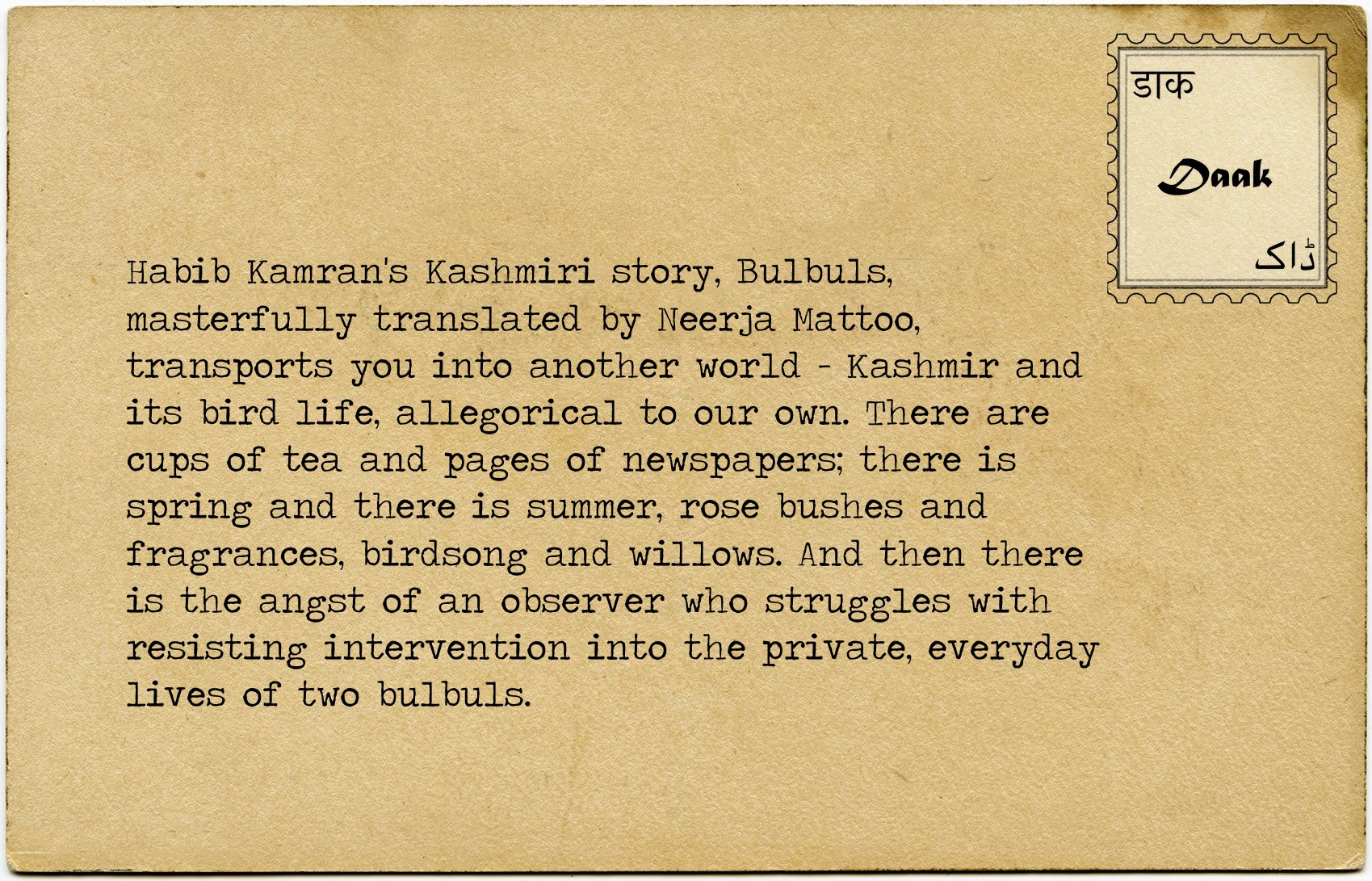 Thinking of songbirds and their nests: Habib Kamran’s Bulbuls

Kashmiri writer Habib Kamran’s (1927-2007) story is one of a genius undiscovered in his lifetime. He worked in the education department of the Jammu and Kashmir Government and started his literary career with novels and short stories but unfortunately did not manage to publish much during his lifetime. His work has since been translated and published widely, however, his is a name that still remains unknown in Kashmiri literature.
One of his short stories, titled Bulbuls, follows the story of a pair of bulbuls (songbirds) that the narrator observes making a nest in his garden. Thus begins a record of many months of musings on the lives of these birds – a beautifully crafted one that transforms the quotidian life of the birds into a meditative experience for the reader.

Over the course of the first summer and the subsequent two years, we see the birds lay their eggs, hatch them, nurse their babies, and teach them to fly. Throughout there are struggles in their lives – imminent danger from a cat trying to sniff its way up the nest, the death of a bulbul and abandonment of their home. The narrator gives us his detailed thoughts, his words are restless and his worries apparent. Throughout we can see how his headspace is occupied by it.

The bulbul was not doing that, it could barely manage to feed them, the question of brooding did not arise. Perhaps that was a female’s job. Maybe when the cat climbed the tree, the bulbul was aware of what was coming – birds and animals are supposed to have a sharper sense of danger. It would have had the option of flying away to save itself. But this bulbul must not have done so for that would have left the babies unprotected; it had chosen to sacrifice itself to the cat rather than let harm come to the little ones. Such sacrifice only a mother can make, generally. All this made me feel that the dead one must have been female, though nothing could be said with a degree of certainty.

He observes and documents the lives of these birds and doesn’t leave it at that – he constantly connects their sociality with the lives of humans.

The bulbul was alone. My belief that a bulbul builds a nest only to lay eggs, hatch them and nurture its fledglings was now confirmed. The nest is not a home in the human sense.

So much so that the only human interaction in this story of two years lasts twenty minutes. It is one with a visitor in the narrators garden and something he very clearly is not interested in giving time or attention to. His note on how long the visitor keeps him away from the bulbuls is telling of his disinterest.

Meanwhile, a visitor arrived. Since I was in the garden he let himself in. I had no choice but to get up, greet him and take him inside the house. I did ask for tea to be brought to my guest but apart from some formal small talk, I had no desire to really converse with him. I was afraid that conversation might drag on, and my thoughts were actually on the bulbul babies. I did not want them to come to any harm. My lack of conversation soon bored the guest and he rose to leave. Seeing him off, I returned to my usual place in the garden. I had been away for slightly over twenty minutes.

Masterfully translated into English by Neerja Mattoo, this story transports you into another world – Kashmir and its bird life, allegorical to our own. There are cups of tea and pages of newspapers; there is spring and there is summer, rose bushes and fragrances, birdsong and willows. And then there is the angst of an observer who struggles with resisting intervention into the private, everyday lives of two bulbuls.

It remained empty, but the bulbul did not bring his new bride into it. Perhaps she did not want to lay her eggs or hatch them in someone else’s home. As winter approached, we again pruned the willow. Along with the cut branches, down came the nest, and mingling with the heap of rubbish, it vanished.

You can read this story in this collection of animal stories by Aleph.