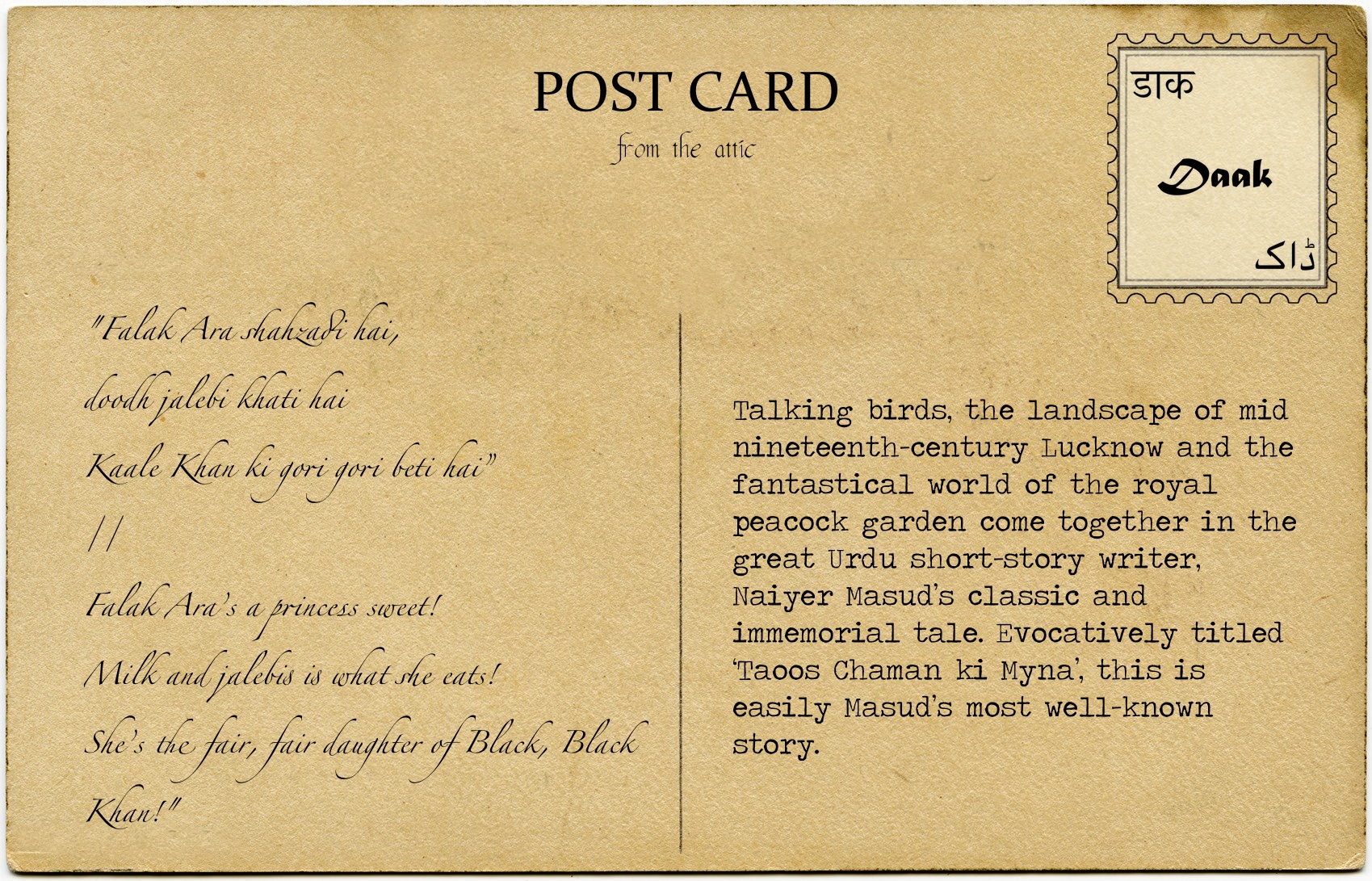 A young widower’s yearning for his daughter’s happiness entangles with his duty to be honest and loyal to his occupation. Talking birds, the landscape of mid nineteenth-century Lucknow and the fantastical world of the royal peacock garden come together in the great Urdu short-story writer, Naiyer Masud’s classic and immemorial tale. Evocatively titled ‘Taoos Chaman ki Myna’, this is easily Masud’s most well-known story. Published in 1997, the story opens with Kale Khan, a poor unemployed man inconsolably grieving after his wife’s death. Completely oblivious in his misery to his young daughter, he unexpectedly acquires a job at the Royal Peacock Garden owned by Nawab Wajid Ali Shah, the actual historical figure who was the last Nawab of Awadh. It is at this confluence of imagination and historical truth that the magic begins. As Kale Khan encounters the splendid world of the talking mynas in a grand cage built on royal orders for the Nawab, his heart begins to open towards his daughter and a beautiful relationship begins to develop between the grieving father and daughter. It is a poignant moment then, and raises no alarm in the reader about what is to come, when he starts calling one of the mynas by his daughter’s name. In the ensuing pages, the reader encounters a strangely charming parallel: the child, Falak Ara who insistently demands with a childish simplicity for her father to bring a myna for her companionship, and ‘Falak myna’, the bird in the royal cage who Kale Khan begins to affectionately calls by his daughter’s name. As the story advances, a strange twist brings the world of the royal peacock garden and Kale Khan’s small home in Lucknow’s poorer parts into an unlikely intimacy.
The wonder and beauty of the story, though, lies not only in its clever plot, which brings home the glaring paradox of the opulent royal palace and Lucknow’s poorer sections, but in evoking for the modern reader, a world that is so distant it seems almost irretrievable. Here we have none of the elite representations of colonial Lucknow brought forth in Hindi films, none of the stereotypical images of splendour and glamour in the Muslim court. Instead, we have the real flesh of the city- the names and streets and grit, the lives and fears and hopes of an average citizen in Lucknow in the 1850’s. And it is in this aspect that Masud’s unique talent becomes evident. A Persian and Urdu scholar and dedicated researcher for most of his life, Masud turned to fiction later in his life. The immaculate scholar in him becomes evident as he sets this story of emotional power and simplicity- that makes it a rare feat in literature; equally a story for children and adults- in a historically rooted and contextual setting. It is then a delight not only for the heart, in its depiction of a father-daughter relationship against the odds, but also for anyone interested in the history of places; it allows the reader to feel the texture of nineteenth century Lucknow in this great classic of Urdu literature.

Read this magical story here and even better, listen to it in Urdu here.