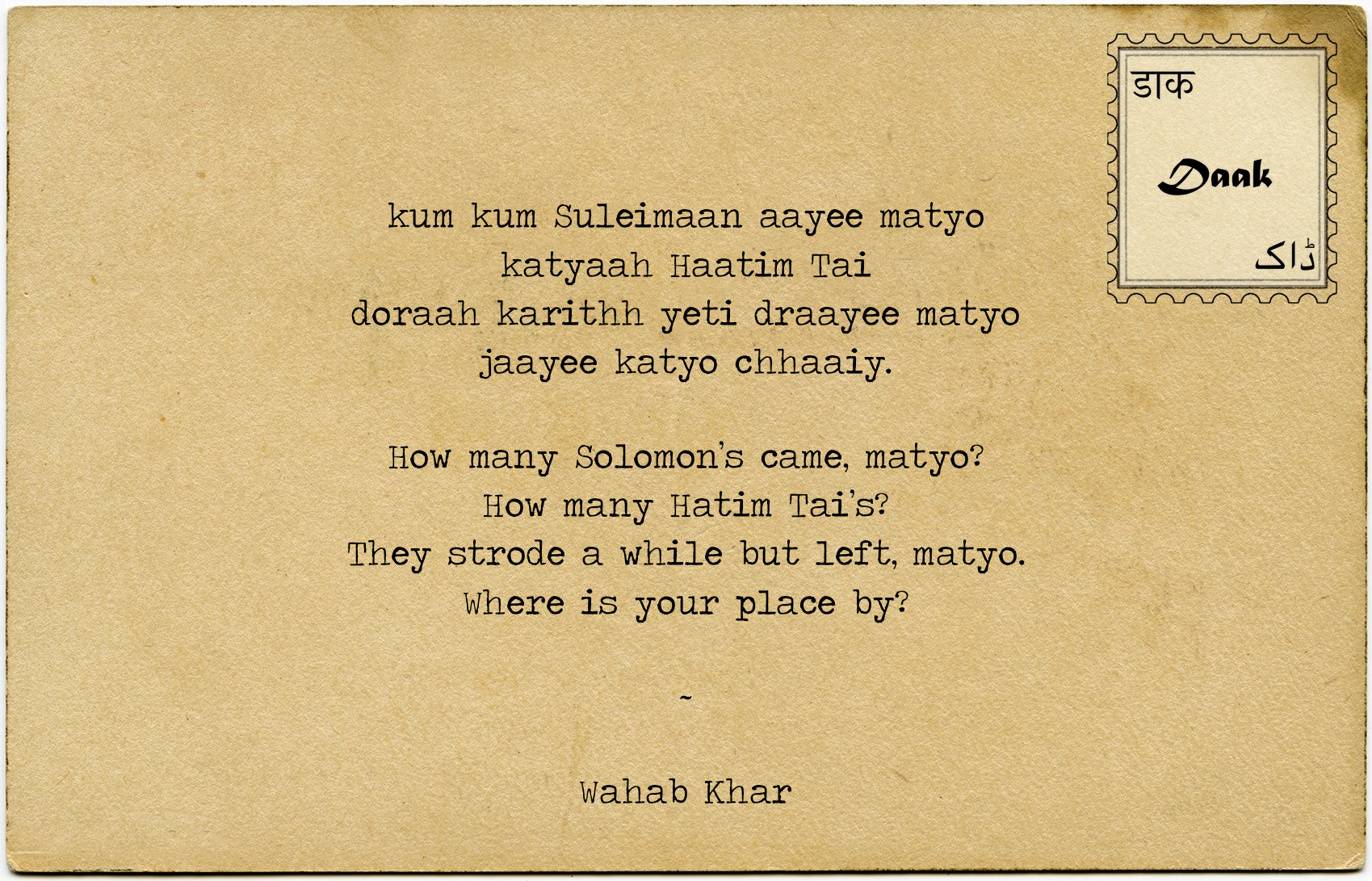 Little is known about Kashmiri mystic poet-saint Wahab Khar. He is said to have been born in the early 19th century and died in the year 1912. The dates are uncertain, but other biographic details are often told and retold. He came from a lineage of poets: his father and grandfather, both blacksmiths by profession, were also venerated Sufi poets. As his name ‘Khar’ suggests, he too was a blacksmith. His initial training began at home but later he was sent to attain spiritual knowledge from other learned men of his time. As an unlettered man his grasp on the world and its woes, as well as a mastery over verse and Islamic lore, does not fail to inspire awe.

The Almighty created it all

How could I aim to reach its end?

The limitless and infinite is transcendent

In his domain exists no day or night.

Legends surrounding him say that Wahab Khar was once able to shoot out a hot water spring from amid a forest on his own, a spring that flows till date. He is also said to have hosted nightlong gatherings in the remembrance of God with fellow devotees and disciples. Many contemporary mystics and poets congregated at his home in these nights of prayer and devotion. Like other Sufi mystics, he wrote about the love of God as the true source and essence of all other forms of love, including romantic love. While difficult for us to understand in this age of quick attachment, Sufi poets often delved into this wellspring of divine, perennial love.

Metaphor is strong in Wahab Khar’s poetry. A recurring motif being that of the woodcutter, at whose mercy the poet places himself.

You axed me again and again

His constant sense of wonder at the insignificance of the individual when faced with the divine is also evident here. Philosophy rooted in religion has often said that to love all humans is to love the divine, and love for the divine is deeply interlinked with all the creations that we love. It is here that we see a love for the divine expressed in a very worldly idiom.

The more he knows God, the more he partakes in self-annihilation. Here, he offers a craftsperson metaphor – of chiseling, breaking down and recasting, much like what one goes through in divine love.

In past, with grandeur I was a Deodar of dense forest

What would I do being speechless?

I have been reduced to pieces by woodcutter

He rolled me–a grand Deodar down to hills & brooks

This swift axe cut me into slices

He hammered me into small pieces

Then crafted them into delicate Items

While his work on divine yearning and self-sacrifice might be too lofty for us lesser mortals, luckily, there is wisdom to be found in his more worldly and accessible verse.

How many Solomon’s came, matyo*

How many Hatim Tai’s

They strode a while but left, matyo

Where is your place by?

With inputs from Salik Basharat.