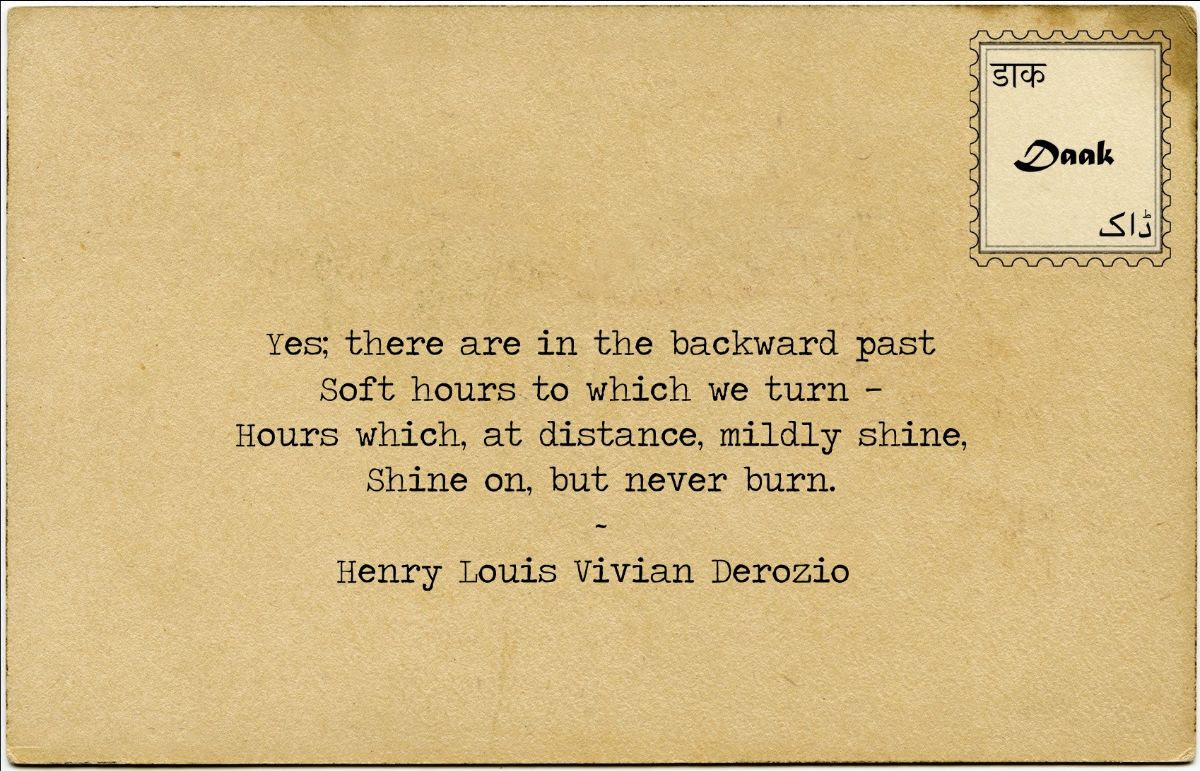 The Spiritualness of All that Cannot Die: H. L. V. Derozio’s Poem ‘A Walk by Moonlight’

The current social and political state of the world is proof of the fact that our greed and pursuit of material possessions is a self-defeating cycle. While it temporarily fills a void, what it ultimately does, is multiply the feeling of hollowness. Poets have often reminded us that it is far more meaningful to seek nature and spirituality—perennial gifts that keep on giving.

In his very short life, Henry Louis Vivian Derozio managed to articulate this tenet in the form of a lyrical poem, ‘A Walk by Moonlight’.

Born to a Portuguese father and an English mother, Henry Louis Vivian Derozio (1809-1831) was born in Kolkata. At the age of 14, he left school and joined his uncle’s indigo factory situated on the scenic banks of the Ganges in Bhagalpur. It is here that he got inspired by the beauty of nature and began to compose poetry.

A young achiever, Derozio was appointed a teacher of English Literature and History at the Hindu college at 17 years of age. He introduced his students to Western science and radical ideas, and strongly encouraged debate and discussion around social and political issues.

At the tender age of 22, he lost his life to cholera, however, his legacy lived on among his students who led reforms in social justice, law and journalism.

His poetry serves as a timely reminder that nature can provide the strength and solace we so desperately seek.

Read the full poem below:

A Walk by Moonlight

Last night — it was a lovely night,
And I was very blest —
Shall it not be for Memory
A happy spot to rest?

Yes; there are in the backward past
Soft hours to which we turn —
Hours which, at distance, mildly shine,
Shine on, but never burn.

And some of these but yesternight
Across my path were thrown,
Which made my heart so very light,
I think it could have flown.

I had been out to see a friend
With whom I others saw:
Like minds to like minds ever tend —
An universal law.

And when we were returning home,
“Come who will walk with me,
A little way”, I said, and lo!
I straight was joined by three:

Three whom I loved — two had high thoughts
And were, in age, my peers;
And one was young, but oh! endeared
As much as youth endears.

The moon stood silent in the sky,
And looked upon our earth:
The clouds divided, passing by,
In homage to her worth.

There was a dance among the leaves
Rejoicing at her power,
Who robes for them of silver weaves
Within one mystic hour.

There was a song among the winds,
Hymning her influence —
That low-breathed minstrelsy which binds
The soul to thought intense.

And there was something in the night
That with its magic wound us;
For we — oh! we not only saw,
But felt the moonlight around us.

How vague are all the mysteries
Which bind us to our earth;
How far they send into the heart
Their tones of holy mirth;

How lovely are the phantoms dim
Which bless that better sight,
That man enjoys when proud he stands
In his own spirit’s light;

When, like a thing that is not ours.
This earthliness goes by,
And we behold the spiritualness
Of all that cannot die.

‘Tis then we understand the voice
Which in the night-wind sings,
And feel the mystic melody
Played on the forest’s strings.

The silken language of the stars
Becomes the tongue we speak,
And then we read the sympathy
That pales the young moon’s cheek.

The inward eye is open then
To glories, which in dreams
Visit the sleeper’s couch, in robes
Woven of the rainbow’s beams.

I bless my nature that I am
Allied to all the bliss,
Which other worlds we’re told afford,
But which I find in this.

My heart is bettered when I feel
That even this human heart
To all around is gently bound,
And forms of all a part;

That, cold and lifeless as they seem,
The flowers, the stars, the sky
Have more than common minds may deem
To stir our sympathy.

Oh! in such moments can I crush
The grass beneath my feet?
Ah no; the grass has then a voice,
Its heart — I hear it beat.