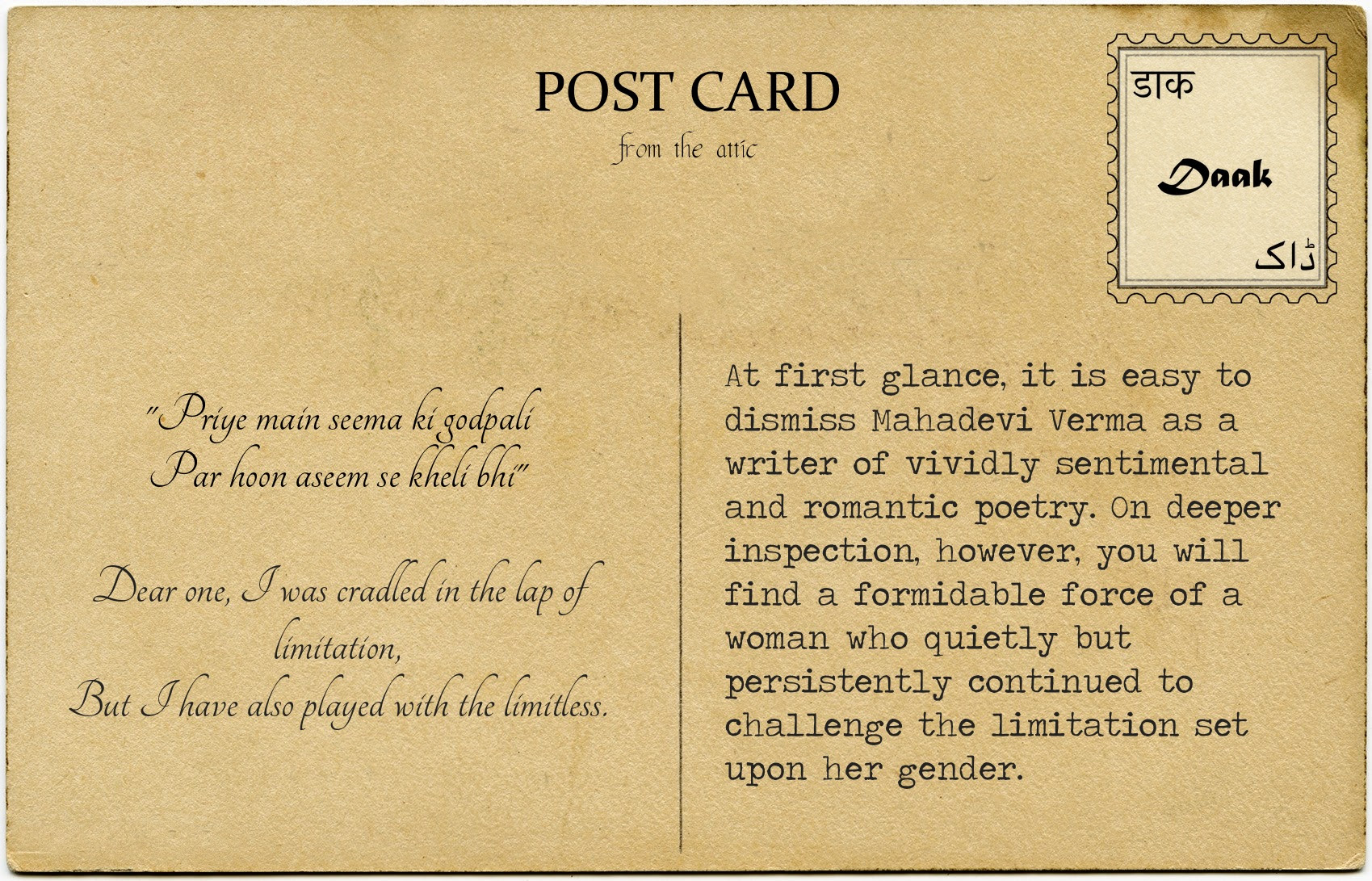 At first glance, it is easy to dismiss Mahadevi Verma (1907-1987) as a writer of vividly sentimental and romantic poetry. On deeper inspection, however, you will find a formidable force of a woman who quietly but persistently continued to challenge the limitation set upon her gender.

Born in a somewhat orthodox family, she was married at the age of nine. As was the custom at the time, however, she was allowed to live with her parent till she came of age. When it was time to leave for her husband’s house, Verma vehemently refused and even attempted to convince him to file for a divorce.

To Verma, it was painfully obvious that in order to pursue a career as a writer and an educator, she would need to be free of the shackles of social conventions such as marriage. In ‘Ghar Aur Bahar’ (Home and World), she writes, “As soon as [women] are married, the dreams of a happy home-life become handcuffs and chains and grip their hands and feet in such a way that the flow of the life-force stops within them.”

As a poet of the Chayavad moment (The Indian equivalent of the Romantic movement), Verma’s writing was infused with deep feeling and emotion. Although many of her poems speak of romance, rapture, longing and love, she was no slave to her passion or impulse. She was distinctly self-aware and claimed both her personal freedom and professional space. She fought for her beliefs tirelessly, a sentiment that resonates in her poem ‘Panth Rehne Do Aparichit, Pran Rehne Do Akela’ (Let the Path be Unknown, and me Alone).

Those feet must be someone else’s, which were defeated,
Which returned after surrendering their resolution to obstacles,
My feet are different: unafraid of sorrow, eager to create,
My feet measuring immortality,
In their quest to reinvent
They will create a golden era even in darkness.

Those stories must be someone else’s
The sounds of which were destroyed in vacuum, and all traces lost in dust,
My story is one which even amazes destruction,
I create everyday,
A market of pearls,
And a festival of sparks.
Let the path be unknown, and you me alone!

Verma uses her poetry to talk about the numerous roadblocks in her own life and her renewed vigor at each setback to pursue success. The modernity and relevance of her voice is painfully obvious in light of the personal and professional battles that women continue to fight till date.

While she appears as a fearless warrior in the poem above, she also admits to her softness and vulnerability, and to the complex elements that make her a woman: sweetness mingled with sadness, laughter juxtaposed with ferocity, ambition to counter resignation.

In ‘Priye, Main Hoon Ek Paheli Bhi’ (Dear One, I too, am a Riddle), she enumerates the source of both, her strength and weakness, her joy and sorrow, the very core of her womanhood.

Ceaselessly, from all pores of my being,
Flows the torrent and the fire.
I love detachment and desire
Awakening in my breath.
Dear one, I was cradled in the lap of limitation,
But I have also played with the limitless.

You can listen to a recording of these poems on our podcast for Himal Southasian here.