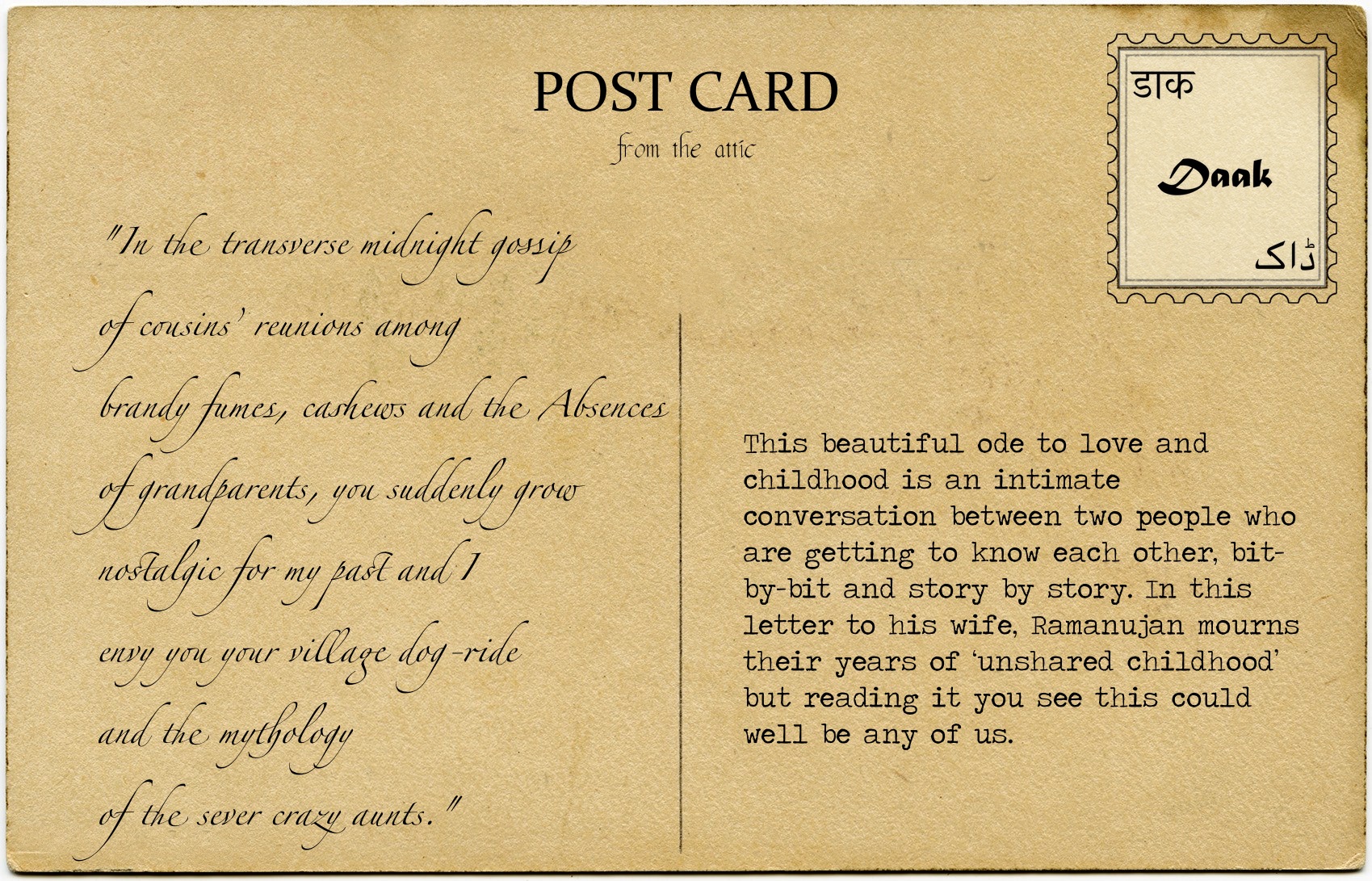 The Namelessness of Childhood: AK Ramanujan’s Love Poem for his Wife

This beautiful ode to love and childhood is an intimate conversation between two people who are getting to know each other, bit-by-bit and story by story. In this letter to his wife, Ramanujan mourns their years of “unshared childhood” but reading it you see this could well be any of us. It talks of parents one knows as children and the parents one knows now. It shows how families change and equations transform as one ages. It recreates the explosion of sights, sounds and smells one encounters growing up in an Indian household.

This poem is an ode to lovers who enjoy recreating memories through images—through black and white photographs and the colourful stories they reveal. It picks up objects and memories that come with them to weave a childhood. It invokes all this but ends on a note that leaves one confused. Does Ramanujan mention incest and child marriage, albeit in jest, and make you consider it just for the ability to share memories with a lover?

Reading this one wonders, isn’t the beauty of falling in love partly also recreating our stories and reliving them with rose tinted glasses? Much more could be said about this lovely poem, but we will keep it short so you enjoy it on your own.

Really what keeps us apart
at the end of years is unshared
childhood. You cannot, for instance,
meet my father. He is some years
dead. Neither can I meet yours:
he has lately lost his temper
and mellowed.
In the transverse midnight gossip
of cousins’ reunions among
brandy fumes, cashews and the Absences
of grandparents, you suddenly grow
nostalgic for my past and I
envy you your village dog-ride
and the mythology
of the sever crazy aunts.
You begin to recognize me
as I pass from ghost to real
and back again in the albums
of family rumours, in brothers’
anecdotes of how noisily
father bathed,
slapping soap on his back;
find sources for a familiar
sheep-mouth look in a sepia wedding
picture of father in a turban,
mother standing on her bare
splayed feet, silver rings
on her second toes;
and reduce the entire career
of my recent unique self
to the compulsion of some high
sentence in His Smilesian diary.
And your father, gone irrevocably
in age, after changing every day
your youth’s evenings,
he will acknowledge the wickedness
of no reminiscence: no, not
the burning end of the cigarette
in the balcony, pacing
to and fro as you came to the gate
late, after what you thought
was an innocent
date with a nice Muslim friend
who only hinted at touches.
Only two weeks ago, in Chicago,
you and your brother James started
one of you old drag-out fights
about where the bathroom was
in the backyard,
north or south of the well
next to the jackfruit tree
in your father’s father’s house
in Alleppey. Sister-in-law
and I were blank cut-outs
fitted to our respective
slots in a room
really nowhere as the two of you
got down to the floor to draw
blueprints of a house from memory
of everything, from newspapers
to the backs of envelopes
and road-maps of the United States
that happened
to flap in the other room
in a midnight wind: you wagered heirlooms
and husband’s earnings on what the Uncle in Kuwait
would say about the Bathroom
and the Well, and the dying,
by now dead,
tree next to it. Probably
only the Egyptians had it right:
their kings had sisters for queens
to continue the incests
of childhood into marriage.
or we should do as well-meaning
Hindus did.
betroth us before birth
forestalling separate horoscopes
and mother’s first periods,
and wed us in the oral cradle
and carry marriage back into
the namelessness of childhoods.