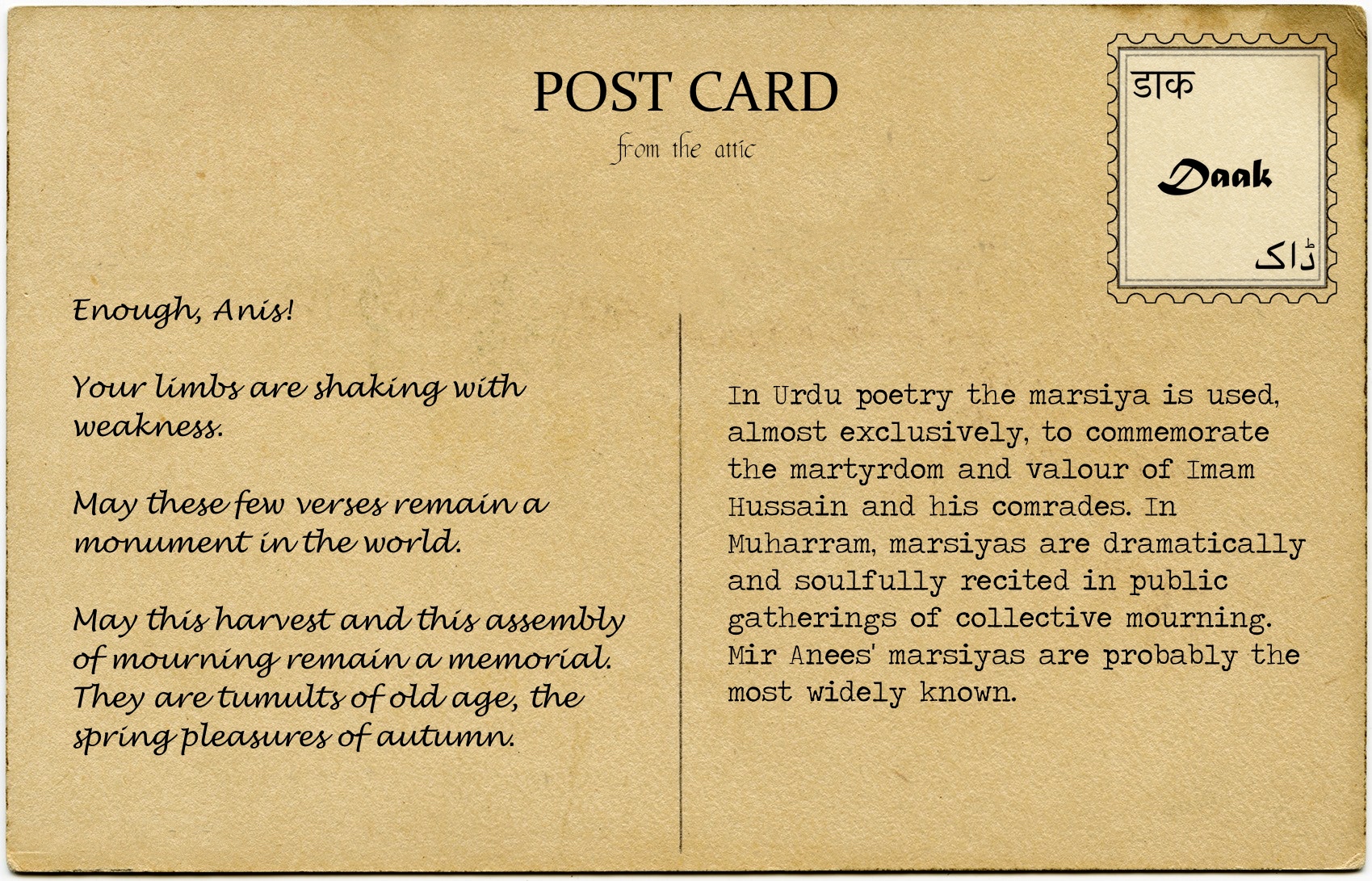 Mourning in Muharram: A Marsiya by Mir Anees

Muharram, the first month of the Islamic calendar, is a period of mourning for Muslims worldwide. While practices differ worldwide, the first ten days of the month are marked by all, culminating in memorializing the tenth day when in the Battle of Karbala, the Prophet Muhammad’s grandson Hussain and his supporters were martyred.

Within the Urdu tradition there is a distinct style of poetry called the marsiya, used almost exclusively to commemorate the martyrdom and valour of Imam Hussain and his comrades. In Muharram, these poems are used in public gatherings of collective mourning. A dramatic recital is meant to move the audience to tears over the tragic fate of Imam Hussain and his supporters who were deprived of water and food before being mercilessly murdered. The fact that they knew it was a losing battle from the start but still chose to go ahead and make this sacrifice is seen as a gift to Islam. These elegies are performed in public recitals are often dramatic, and range from elocution to singing.

Many insist that Mir Anees pioneered the Urdu marsiya in its current form. His name is synonymous with this genre and we bring to you excerpts from one of the most famous ones. Each verse of the marsiya is laden with details, be it the brutality of the opposing army, personal stories of each of the characters or even the hot weather the army was facing in hunger and thirst.

When the sun had completed its night journey, the unveiled dawn appeared in all its radiance; the king (Hussain) whose stirrups are the firmament looked towards the sky. That Lord, turning to his companions, called them out and said, ‘At last the time has come; praise and magnify the Lord. Arise and perform the morning prayer.

Mir Anees ends the marsiya with the following verse, reminding us how his wish for this piece of literature, remains fulfilled,

Enough, Anis. Your limbs are shaking with weakness. May these few verses remain a monument in the world. Yet, in the weakness what lofty verses have come from the pen. The words please the world, the verses please kings. May this harvest and this assembly of mourning remain a memorial. They are tumults of old age, the spring pleasures of autumn.

The full marsiya, much longer and in stanzas of 6 verses, is here in both Urdu and an English translation: http://www.columbia.edu/itc/mealac/pritchett/00urdu/anis/index.html