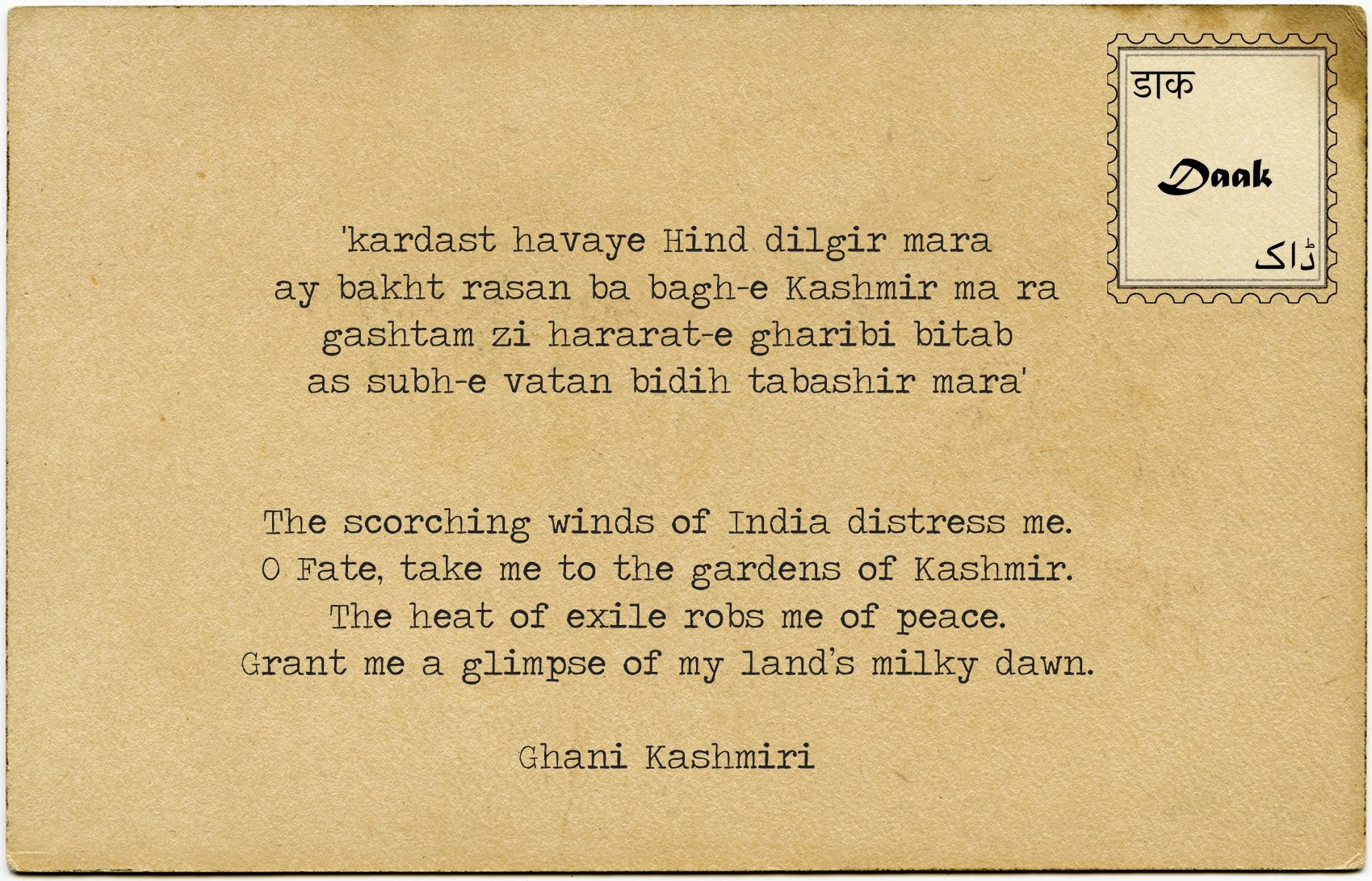 Mulla Muhammad Tahir Ghani, known as Ghani Kashmiri, is one of the foremost Persian language poets in the subcontinent and possibly the most popular Persian poet of Kashmir. While his biographical details are obscure, he likely lived in the first decade of the 17th century in the old city of Srinagar.

Accounts suggest that he very likely lived all of his life in Kashmir – spending very brief periods outside. One instance of his traveling to the Indian plains and a rare journey seems to have ill-agreed with him:

The scorching winds of India distress me.

O Fate, take me to the gardens of Kashmir.

The heat of exile robs me of peace.

Grant me a glimpse of my land’s milky dawn.

Strong cultural, linguistic and religious and literary ties with Iran existed since 14th century between Kashmir. Kashmir came to be known as Iran-e-Saghir (Minor Iran). Translations were aplenty – between Sanskrit, the original language of Kashmir, and Persian, a lot of diffusion took place here. Persian as the official court language, flourished. Persian provided a new vocabulary, new idiom to Kashmiri replacing Sanskrit. Ghani Kashmiri flourished in this time.

His poetic repertoire has odes to the homeland –  vivid, dramatized descriptions of its beauty and climate.

Kashmir’s beauty sparkles through its fairness.

Black beauty here, if any, is as rare as a mole.

Yet, in an interesting masnavi, he takes many verses to describe the biting cold of Kashmir – in great detail and with plenty of humor. Below are some verses from Masnavi Shita’iyah and the full poem in translation.

The minstrel’s hand is without a drum.

It seems the dewy song has frozen too.

Cold has turned water into ice.

In all this, the duck in the water croons

He ends this poem describing a personal predicament,

This winter’s tale I can no longer narrate

For the tongue is now an icicle in my mouth.

In this season where the water is frozen

Every bubble has become a glasshouse.

The stream flowing across the garden

The minstrel’s hand is without a drum.

It seems the dewy song has frozen too.

Cold has turned water into ice.

In all this, the duck in the water croons

The spark too has been struck by the chill

And has hid itself back in the flint.

The spark and flame are together no more.

The chilly drought has torn them apart.

No sooner does a spark rise from the fire

Than it turns into a hailstone.

Such is the nip in the biting air

That the moist eye resembles a stony glass.

Scared to their bones now men are of water

Like the mirror they hide it under the earth.

The means of living are in the hands of Chinar

Which in autumn has provided for fire.

The fish offers itself to the hook

So cold has the oven of the sky become

No longer visible is the bread-like sun

Can a stream flow on the face of the earth

When the sun’s eye itself is frozen?

Release from the stinging cold does the fish find

When it slits itself with the icicle’s sword

No fear of water does the snow show.

The ember glowing in the brazier

He who relaxes his hold on the chair

Finds himself skating on the ice.

And he who breaks his leg on the ice

Is plastered there on the wooden plank.

His joy knows no bounds if a sad soul

Gets hold of a few flint stones.

How could one walk on the murky earth

If it were not covered with planks of ice?

Agonized such is the fish by the chill

It seeks to flee from all that is wet.

Every sigh that soars up to the sky

Becomes a snowflake and falls to the ground.

Behold the game that the winter plays

Though a flame hides within its breast

The leaf of chinar breathes no warmth.

And he whose life leaves him in this chill

Prefers hell to escape the cold.

As children make their way to school

They practice skating on the planks of ice

He is wise who in this season

Narrating this, my tongue is coated with ice.

My breath, it seems, has frozen to make another tongue.

And when the chill turns chillier still

The tear which drops from the crying eye

All this is known to the wise ant

Which entombs itself when alive.

This winter’s tale I can no longer narrate

For the tongue is now an icicle in my mouth.