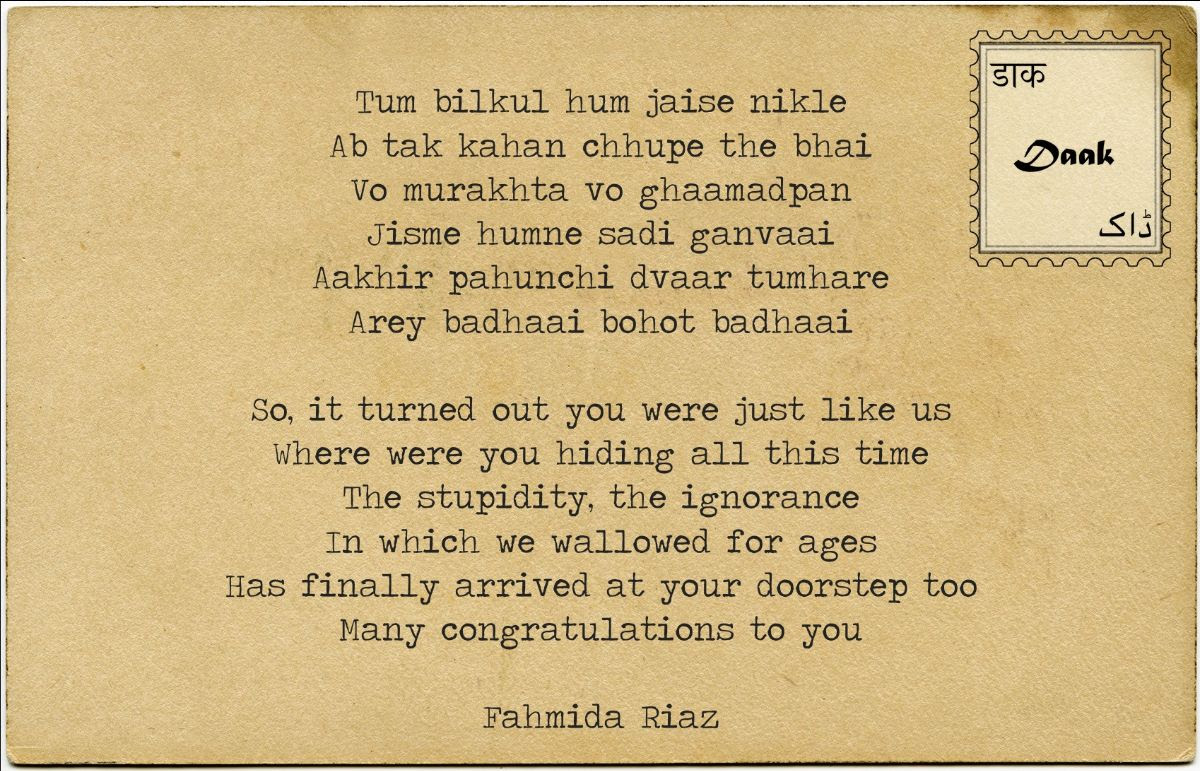 While politicians do their best to divide and isolate us along the lines of caste and religion, artists often look for common threads that bind us in our shared humanity. Poet Fahmida Riaz turns this aspect on its head and through a loving admonishment, compares the prejudices of both the countries she loved and lived in.

Her courage can be summarised in her own words thus: “one should be totally sincere in one’s art, and uncompromising. There is something sacred about art that cannot take violation.”

Riaz spent seven years in India before returning to Pakistan after Zia-ul-Haq’s death. While in India, against a hostile environment of religious intolerance, Riaz recited her poem ‘Tum Bilkul Hum Jaise Nikle’ at a seminar. It compares the rise of Hindutva in India and the rise of Islamic fundamentalism in Pakistan during Zia-ul-Haq’s regime.

So, it turned out you were just like us
Where were you hiding all this time
The stupidity, the ignorance
In which we wallowed for ages
Has finally arrived at your doorstep too
Many congratulations to you

Raising the flag of religion,
Now you will set up a Hindu Raj
You, too, will muddle everything up
You, too, will ravage your beautiful garden
You, too, will sit and ponder –
I can tell preparations are underway –
who is Hindu and who is not
You, too, will be issuing fatwas soon
Here, too, it will be difficult to live
Here, too, you will sweat
You will barely survive
And gasp for air, just like us
I used to wonder with such deep sorrow
And now, I laugh at the idea
It turned out you were just like us
We weren’t separate nations, after all

To hell with education and learning
Let’s sing the praise of ignorance
Don’t look at the potholes ahead
Bring back, instead, the times of yore
Practice harder till you master
the skill of always walking backwards
Let not a single thought of the present
Break your focus on the past
Repeat the same thing over and over –
over and over, say only this
How great and brave was India’s past
How glorious, in the days gone by
Then, dear friends, you too will arrive
At the gates of heaven after all
We have been here for a while now
Once you are there,
Once you’re in the same hell,
keep in touch and tell us how it goes