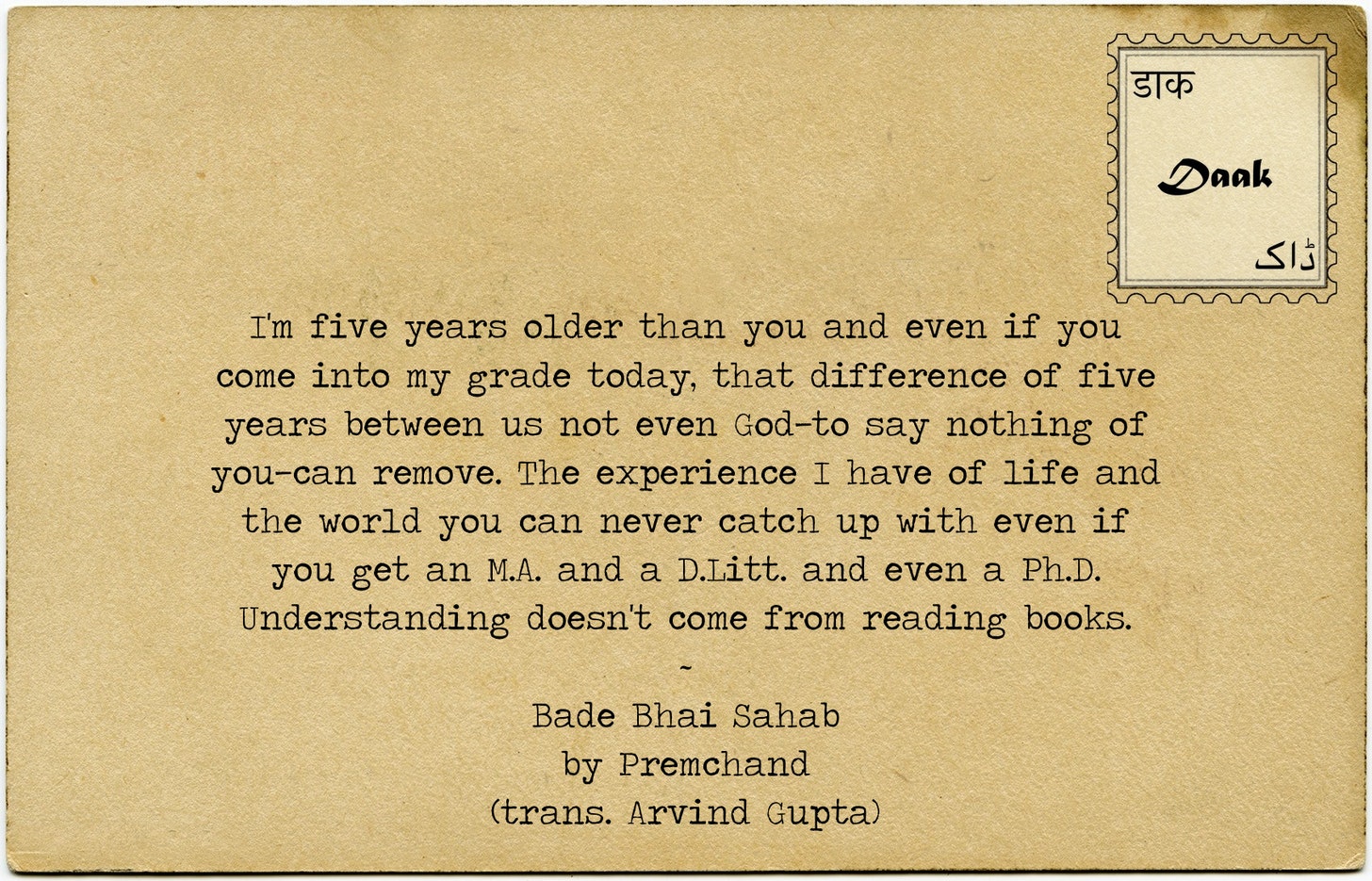 Familial relationships form the bedrock of our social persona, giving us a lifelong benchmark against which we measure subsequent relationships. For this reason, the tensions of a parent-child relationship have been amply explored. However, the compositions and complexities of sibling relationships remain largely uncharted. Perhaps the most profound influencers in childhood, siblings can be a source of great joy or distress; they can be a dependable source of companionship and security, but also of envy and conflict. This layered kinship is captured beautifully in Premchand’s short story, “Bade Bhai Sahab” (My Elder Brother).

Munshi Premchand (1880 – 1936) needs no introduction. One of the most popular writers and social activists of India, Premchand wrote hard-hitting stories about the exploitation of vulnerable and disenfranchised communities. However, in “Bade Bhai Sahab”, Premchand turns his gaze to an intimate portrayal of the affection and rivalry between two brothers who live in a hostel away from home. While the elder brother is studious and conscientious, the younger one prefers to spend his time flying kites and playing with friends. The story, narrated in the younger brother’s voice, begins thus:

My brother was five years older than me but only three grades ahead. He’d begun his studies at the same age I had but he didn’t like the idea of moving hastily in an important matter like education. He wanted to lay a firm foundation for that great edifice, so he took two years to do one year’s work; sometimes he even took three. If the foundations weren’t well-made, how could the edifice endure?

My brother was an expert in the art of giving advice. He’d say such sarcastic words, overwhelm me with such good counsel that my spirits would collapse, my courage disappear.

However, as the pattern repeats each year and the gap between them diminishes, the younger brother begins to get more defiant.

There was only one grade left between my brother and me. The evil thought crossed my mind that if he failed just once more I’d be at the same level as him and then what grounds would he have for lecturing me!

Although outwardly he maintains the status quo, a quiet pride and boldness begins to corrode the respect he has for his elder brother. He even begins preparations for a kite flying competition in secret. As the end of year exams approach, the elder brother once again catches his young sibling playing truant. He senses his younger brother’s impertinence and gives him a sobering dressing down.

“If you thought I would stop shouting at you because there is just one class separating us, you are wrong,” the older boy says. “Even I like flying kites, but I could not because I had to pretend to be a role model for you.”

In a moving speech, the elder brother acknowledges his own failure and inadequacy, but asserts his birthright and responsibility to guide and protect his younger brother’s interests. He continues:

“I’m five years older than you and even if you come into my grade today, that difference of five years between us not even God—to say nothing of you—can remove. The experience I have of life and the world you can never catch up with even if you get an M.A. and a D.Litt. and even a Ph.D. Understanding doesn’t come from reading books.”

The younger brother is deeply ashamed at his own foolish pride and a newfound respect for his elder sibling takes root. In a touching turn of events, the elder brother spots a kite and runs after it, beckoning his younger brother to follow. Perhaps, he imbibes some of the carefree abandon of his young brother. A heartwarming read, the story explores and illustrates the delicate balance of solidarity and hostility between siblings.

Translation by Arvind Gupta. You can read a translation of “Bade Bhai Sahab” and other stories by Premchand here.