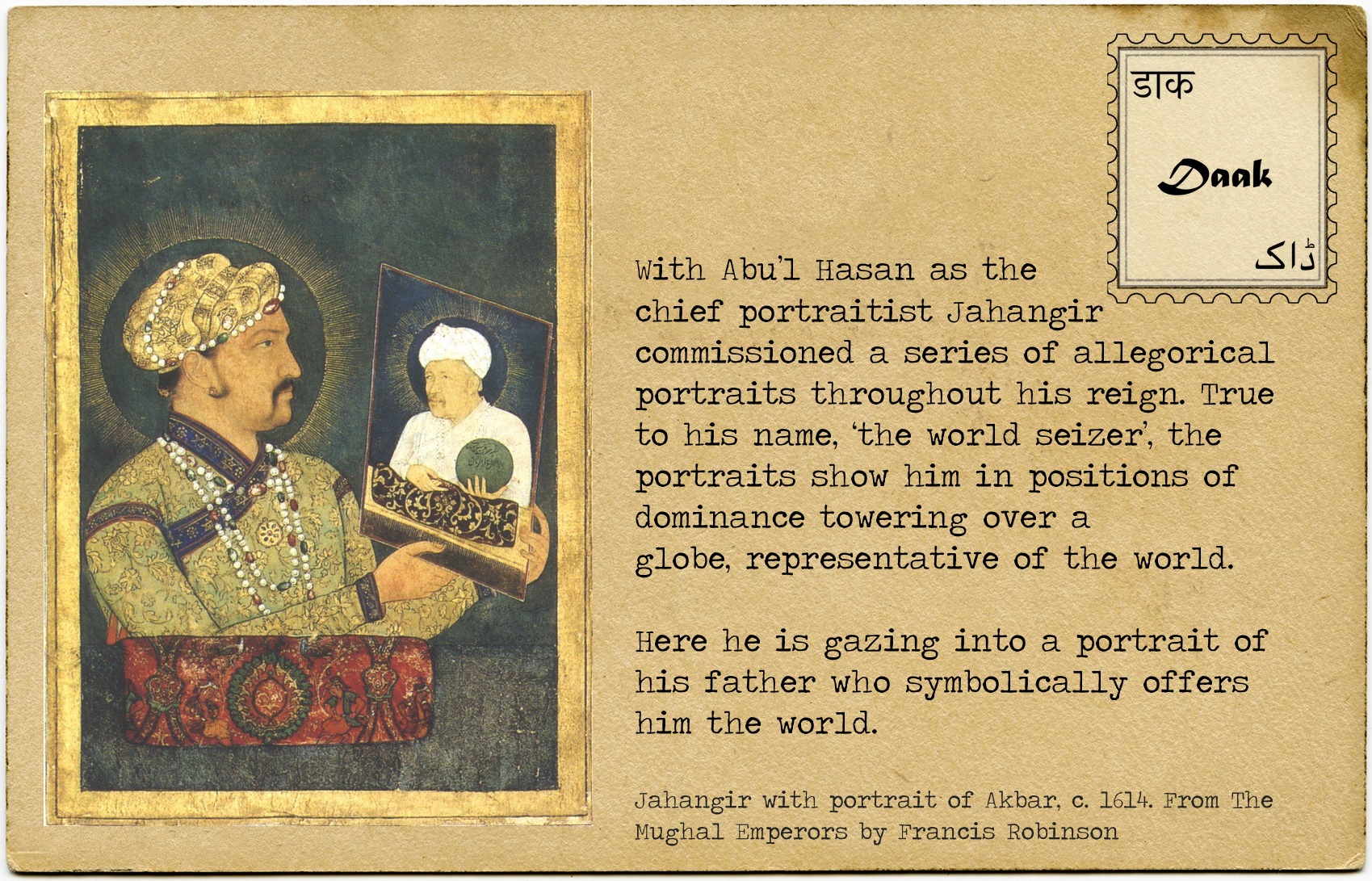 Abu’l Hasan (1569-1627) was a prolific artist under the Mughal emperor Jahangir who was honoured with the tile of “Nadir uz-zaman” (“wonder of the age”). Throughout his career, Abu’l Hasan painted a myriad of themes commissioned by the emperor and influenced by his own personal style.

The Mughals came into contact with the Europeans during Jahangir’s reign, and we can see evidence of the influence of European styles and aesthetics in Abu’l Hasan’s work.

Possibly his most famous painting—of squirrels on a plane tree—is only attributed to him based on its style. There is no conclusive evidence that the painting is created him since it is neither signed nor dated, but has been presumed by experts to have been in his style. In this painting, we see the influence of European styles and techniques like shadow play. Abu’l Hasan is known to have studied the techniques of European pictures and frequently copy them. Perhaps, this is also why his distinction lay in his portraiture. Abu’l Hasan went on to become the most prolific portrait painter of his day. Not only did he excel in realist descriptions, but also experimented with allegorical paintings which went on to become his most unusual and extraordinary work. Given the necessity for symbolism in paintings—especially portraits of emperors in his time, Abu’l Hasan’s paintings had a subtle agenda: they reinforced the supremacy, legitimacy and divine right to rule of his emperor Jahangir.

Mughal symbolic representation first appeared in Emperor Akbar’s reign and gained prominence under Jahangir. With Abu’l Hasan as the chief portraitist Jahangir commissioned a series of allegorical portraits throughout his reign. True to his name, ‘the world seizer’, the portraits show him in positions of dominance towering over a globe, representative of the world.

The first amongst these shows him gazing into a portrait of his father Akbar offering him the world and legitimizing his ascendancy. Jahangir with portrait of Akbar, c. 1614. From page 139 of The Mughal Emperors by Francis Robinson

Another shows him being a presented a book symbolic of wisdom from the 13th century poet and saint, Saadi. Here too we see his feet on the globe, asserting his power and dominance. You might also notice a key-hole in the globe, the key to which is hanging on Jahangir’s belt. There is another painting in which he is seen taking aim at poverty. The painting has a two-line inscription in Persian etched in the sky directly above Jahangir, “The auspicious portrait of His Exalted Majesty, who, with the arrow of generosity, eradicated the trace of daliddar from the world and laid anew the foundation of a world marked by justice and munificence.” Probably the Most famous of these allegorical images is the one that shows Jahangir aiming yet another arrow at the severed head of his nemesis, Malik Anbar. Jahangir standing on a terrestrial globe supported by the cosmic bull and the world fish and shooting at the head of his enemy, Malik ‘Anbar, Abu’l Hasan, c. 1620, Chester Beatty Library, Dublin.

Although they never met, Jahangir had a dream where he embraced the Persian emperor Shah Abbas. Abu’l Hasan painted This imagined encounter albeit laden with symbols and allegories. Like in all of his work, in this painting too, he puts the world under Jahangir’s feet. While Jahangir’s feet are on a lion, Shah Abbas’ are on a sheep. Jahangir’s lion covers the geographical region of India, almost taking up Iran. He is also portrayed as bigger and in control whereas the Shah is shown as smaller and more diminutive.