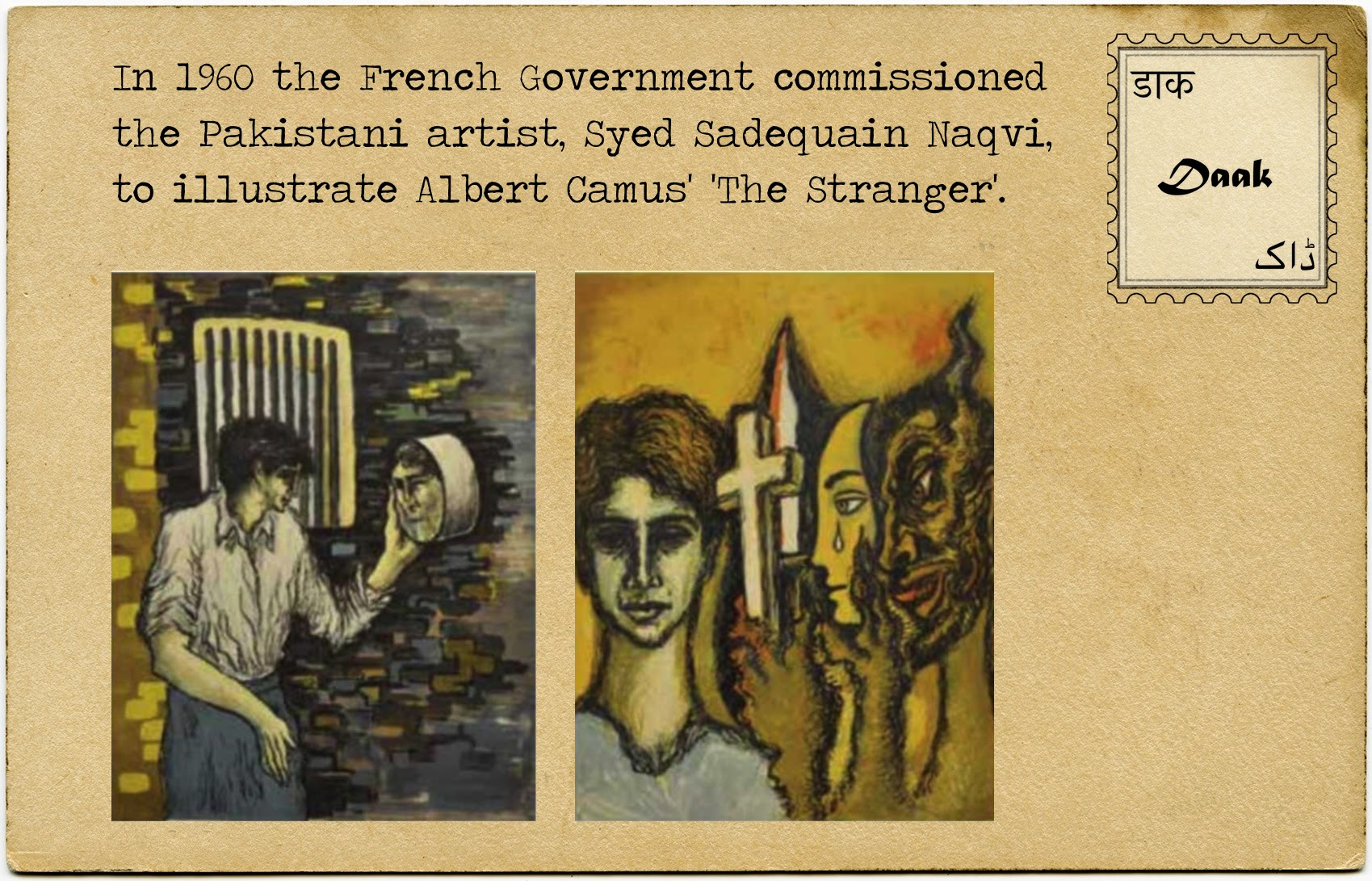 The Holy Sinner – Sadequain’s Illustrations of ‘The Stranger’

Artist Syed Sadequain Ahmed Naqvi (1930-1987) was born Amroha, a North Indian town, into a family of Quranic scribes. Post partition, he moved to Pakistan where he ushered in the renaissance of Islamic calligraphy. His unique style became widely referred to as ‘Khat-e-Sadequaine’.

Contrary to popular calligraphic tradition, much of his imagery was grotesque. In his paintings there were recurring themes of cacti and crows, and crucified figures and bodies trapped in webs. It is said that once at a Karachi seaside desert he observed a wild growth of cacti in the scorching heat. Watching them stand tall and shoot upward defying all climatic odds, emblazoned them as powerful symbols in his mind. His series with cobwebs and crows had allusions to social inequality and were a commentary on the state of moral depravity and injustice.

He is known to have said in an interview,

“People ask why I don’t paint flowers, butterflies and landscapes? I tell them that I seek the truth and I am after reality. I am not inspired by someone posing against the backdrop of roses in a vase or pink curtains. What inspires me is a person who has gone hungry for hours and is struggling for survival. The expression that lights his face at the end of the day when he has finally found some scraps, that is what touches me. I am a painter of the expression of reality.”

Accounts of his personality range between calling him a Sufi to calling him a drunken schizophrenic. However, he is one of Pakistan’s most prolific artists. An interesting man, it is said he preferred to gift away his artworks rather than sell them.

Through the course of his life he painted murals, wrote ‘Rubaiyaat’, illustrated the poems of greats like Ghalib, Faiz and Iqbal. Faiz Ahmed Faiz wrote the foreword to one of Sadequain’s most important publications in which he says,

“The articulate line, calligraphed, woven, chased or tapestried , the muted color stemming from darkness rather than light, the thirst to drain cup of ever newfound image to the last, the suffering without the pity and the agony without the ecstasy appear too enduring to depart.”

From within his oeuvre, the most interesting tid-bit we found was a completely unique project. In 1960 the French Government commissioned him to Illustrate Albert Camus’ ‘The Stranger’ (L’Etranger). That Sadequain was chosen for this task shows the impact and influence of his work in Paris. The book was launched at a gala dinner in Paris on 27th October, 1966.

The book was published in a limited edition of 150 copies. Each copy was printed on ‘velin de Rives’ with deckled edges and issued loose in green cloth portfolio with gilt title on spine and contained in a matching cloth box. A copy in a 2008 Osian’s New Delhi auction sold for Rs 2.8 million.

Sadequain created 22 color prints, and a number of monochrome prints to illustrate key scenes in the book. Here is a selection of some of these images. (With inputs from Asma Firdous)