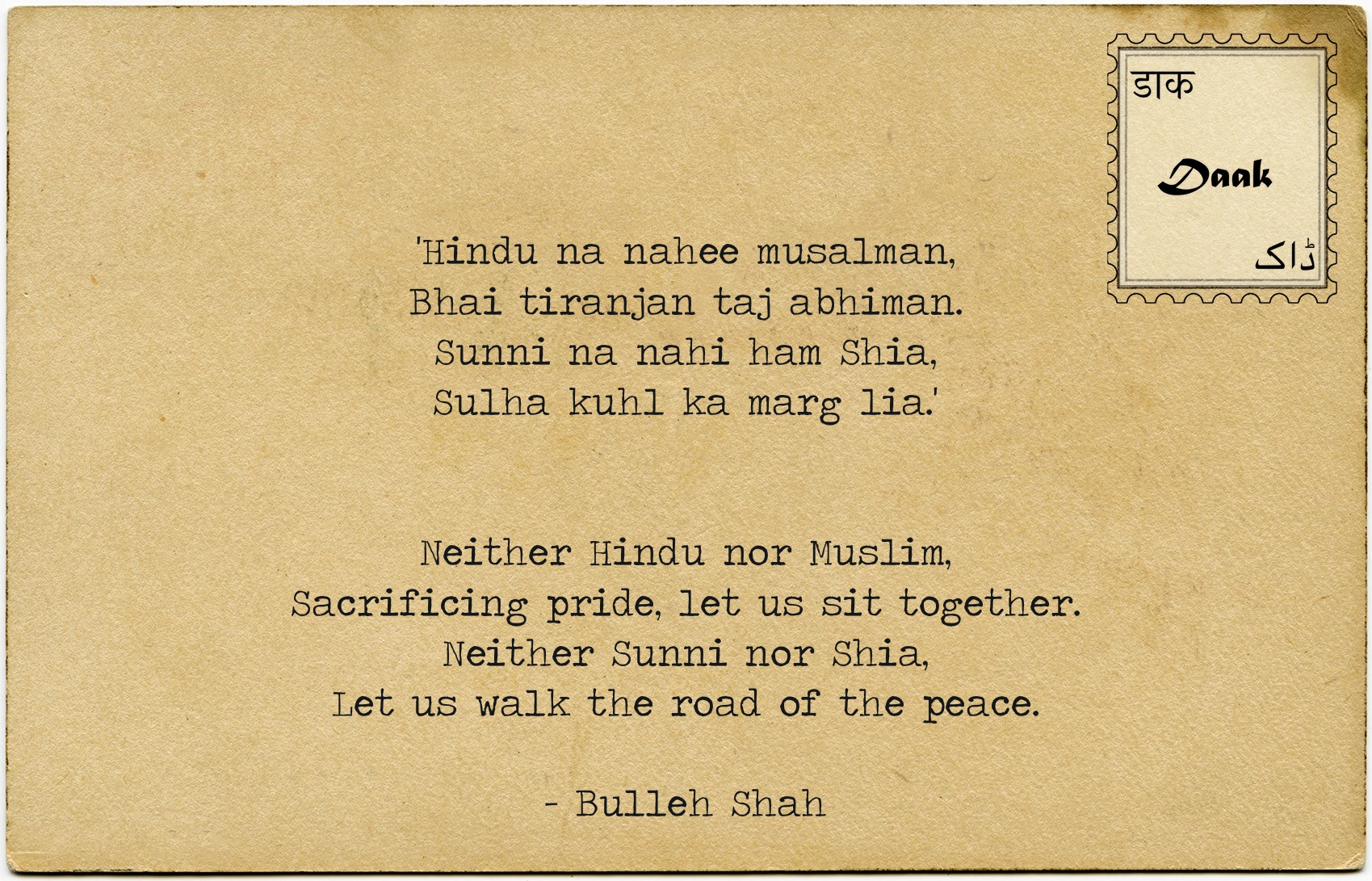 Syed Abdullah Shah Qadri (1680-1757), popularly known as Bulleh Shah, was a Sufi poet and philosopher. His verses have long been rendered into song by popular musicians across the borders in India and Pakistan. Verses from his poetic repertoire are also recited as proverbial wisdom. This does not come as a surprise once we read his poetry – a gift that keeps on giving. For every struggle in life, one can be sure to find answers in his poetry. We bring you selections that speak to much of what we are going through today.

Religious syncretism is the essence of the Indian subcontinent – it is built into its very fabric, however unlikely it may seem in today’s polarized world. Saints and minstrels have long transcended boundaries of organized religion and Bulleh Shah was no exception. Revered equally by Hindus, Muslim and Sikhs, it is no wonder that his verses denounce the barriers built by organized religion.

Neither Hindu nor Muslim,
Sacrificing pride, let us sit together.
Neither Sunni nor Shia,
Let us walk the road of peace.
Neither hungry nor replete
Neither naked nor covered up
Neither weeping nor laughing
Neither ruined nor settled
Neither sinner nor virtuous
What is sin and what is virtue, this I do not know
Says Bulleh Shah, the one who attaches himself with the Lord.
Gives up being Hindu or Muslim

As a Sufi saint, his answer to ritualistic worship was simply to look within. His teachings tell us that destruction of the ego is essential for union with God and not the pilgrimages or sacrifices we are often taught to value.

Many of his verses urge listeners to move away from mere rituals into a state of love for all of God’s creations.

For no reason you abrade your forehead on the ground,
You display reverence at the mehraab,
You recite the Kalma to entertain a listener.
But knowledge does not enter your heart.
Can the truth ever remain hidden?
At this one point, all talk ends.

Hold fast to your murshid
Become a devotee of all creation,
Intoxicated, carefree,
Without desire, indifferent to the world.
Let your heart be fully clean.
Bulla asks, can the truth then be stopped?
At this one point, all talk ends

Taking this idea forth, in yet another verse, we find him looking up to birds, beckoning us humans to learn to free ourselves from greed.

O’ Human Being
These Birds Flying
Do you see what they do?
They don’t store any food with greed
And they don’t die of hunger
Has anyone see flying birds dying of hunger?
It’s greedy Human that store food
It’s Humans that die of hunger.