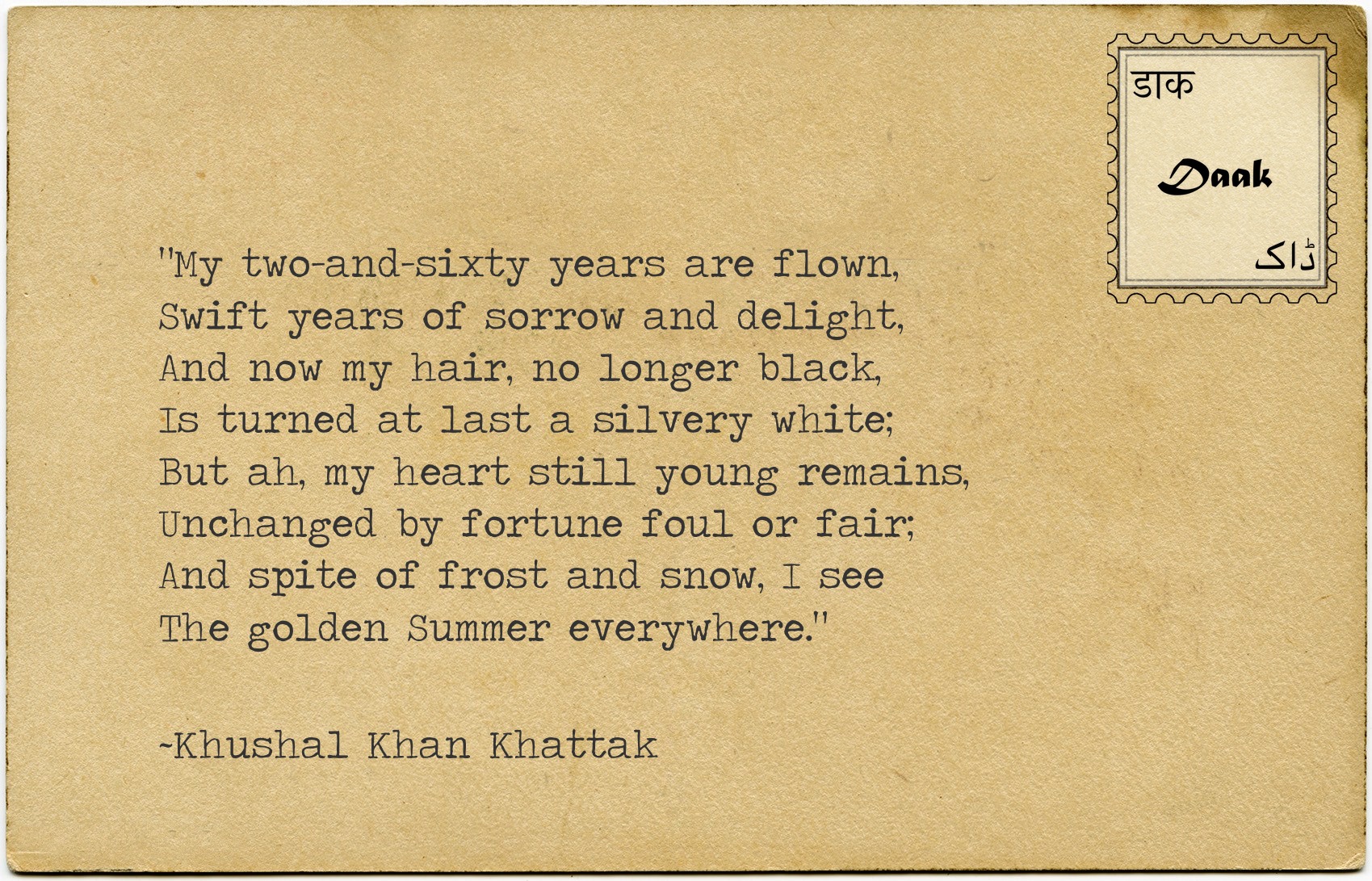 Khushal Khan Khattak (1613-1689), an Afghan warrior poet, is best known for his efforts in preaching for Pashtun unity and exhorting them to rise against the Mughals. He was the son of a tribal chief and later in life, would promote Pashtun nationalism through his verse. Interestingly, during a large part of his adult life, he was mostly engaged in the service of Mughals only to completely change his stance later.

After a peaceful service under Shah Jahan, he grew to have differences with Aurangzeb and was thrown out. When he returned, he dissociated himself from the Mughal Empire and started with a systematic resistance against it.

Often called the ‘national poet of Afghanistan’, his oeuvre spans across genres – from nationalist poetry to praises of Afghan tribes, a manual on falconry, travelogues and books on medicine. From amongst these, we bring you his musings on age and youth. It might be that his own epiphany in later life was responsible for these. These ponderings on youth and age – two things that according to him should not to be confused with each other, offer valuable lessons.

He who is in his old age longeth after youth,
Say to him, “What dost thou that thou mockest at thy shame?”
He whose years are many and joins youth and age together,
Better than his ease is that of the wild rue.
Now so gorged at the table that his power is gone of eating,
Yet insatiable he turns his eyes on the food that is before him.
In their designs, in their behavior, in their deeds,
Suspicious are all men of one another.
Now my beard is white, why should I fear death?
Gone are all my friends, though their hair was black, before me.
They whose orders the whole earth lay under,
Come and look at them now beneath the earth!
Man is but shifting sand if thou look well at him,
Thus it ever changes, rolling round and round.
Fate’s furnace many times have I with my own eyes witnessed,
I, Khush-hal, know well that it burns both green and dry.

In another poem, he further elaborates on the distinction between age and youth, and how in his life, he has been blessed with a youth immortal – like a golden summer.

Immortal Youth
My two and sixty years are flown,
Swift years of sorrow and delight.
And now my hair, no longer black,
Is turned at last a silvery white;
But ah, my heart still young remains,
Unchanged by fortune foul or fair;
And spite of frost and snow, I see
The golden summer everywhere.

And to end, we leave you with some advice for how best to live life and seek happiness – a contentment that comes with curbing our desires for all the luxuries on display ever moment of our lives.

In the excellence of youth, what doubt is there?
The time of old age is full of defects.
In my heart fresh fresh wounds have I,
Well smeared in every wound is salt.
If joy comes upon thee, be not rejoiced at it;
For close upon joy follows ever sorrow.
Make no complaints of other’s wrongs or injuries,
For the greatest wronger of all is Destiny.
Not without design has trouble been created,
For trouble is the touchstone between the manly and the mean.
What of numerous luxuries, delights and hardships?
Happy is he that is satisfied with a single piece of bread.
On someone else I bind my sword, and now turn Devotee:
Enough for me if on my shoulder I hear a staff.
If anyone makes inquiry of wounded hearts,
Ruined is Khush-hal at the hands of his own tribe.