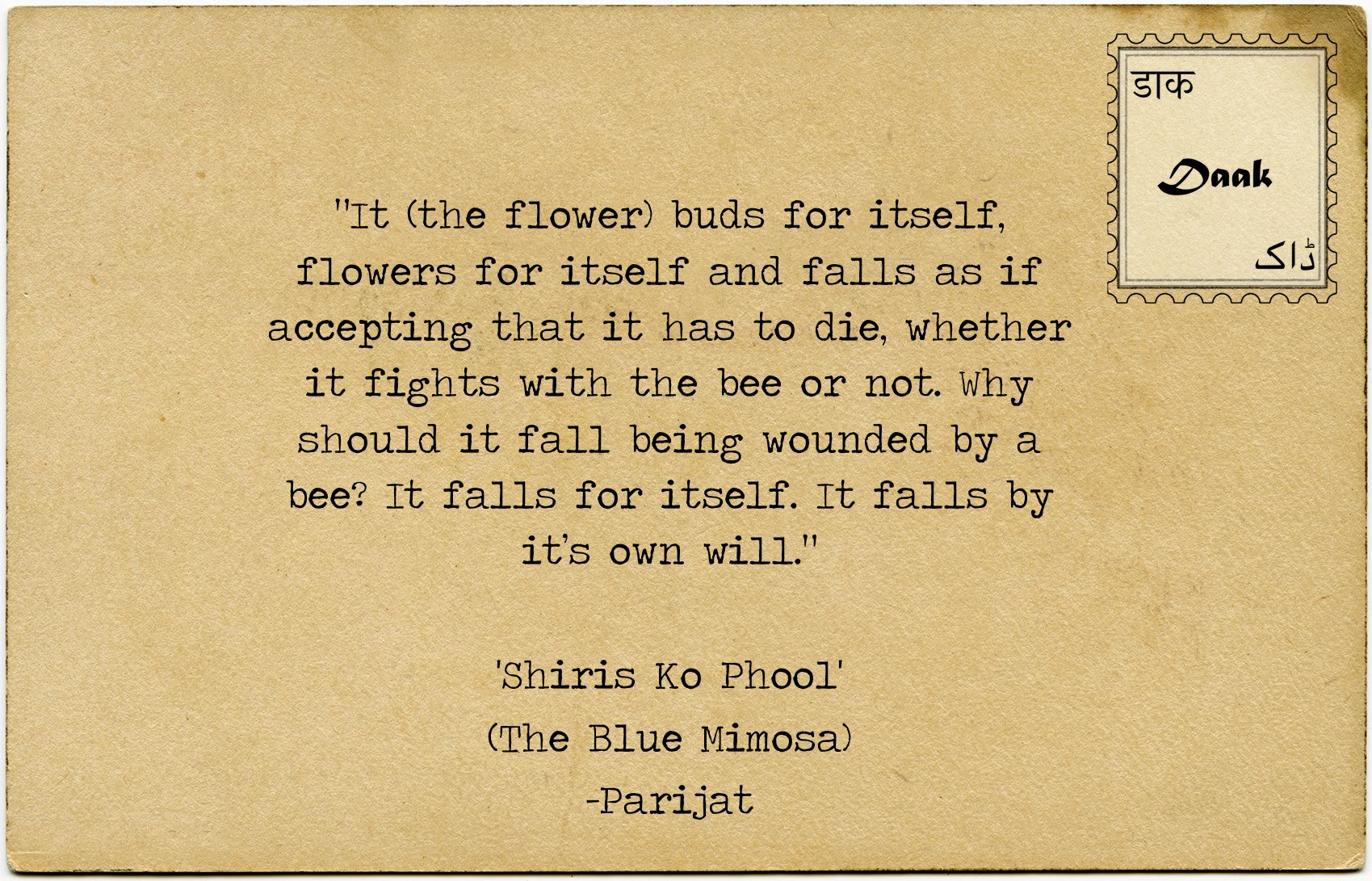 The Flower and the Bee: Parijat’s ‘The Blue Mimosa’

Parijat was the nom de plume of a Nepali writer, Bishnu Kumari Waiba – parijat, a type of jasmine that flowers at night. Her most acclaimed publication was the novel ‘Shiris Ko Phool’ (The Blue Mimosa). It has been translated into English and adapted in curriculums across the world. A 20th century novel, this book was written through the perspective of a World War II veteran, Suyor Bir Singh, who fought against Japan in Burma.

“War simply means chopping up men who are just like us, what else does it mean?”

Suyor Bir Singh has come back dejected and takes to intoxication. The effects of the war on him are obvious – he constantly struggles to find meaning in life. The book brings the reader face to face not only with the traumas of war, but also questions of morality. Traumatised through war, Suyor does not consider any of his actions, including the rape of three women, as a crime. Rather, he takes them as means to attain purpose in his otherwise meaningless life.

“For whoever’s sake or under whoever’s command we fight, it (war) is a crime committed by one person against another”.

His love interest, Sakambari, however, is a strong headed, confident woman and stands out in her rebellion against patriarchal stereotypes of womanhood. She often pronounces blunt and shocking judgments on his actions, not shying from calling him out for his crimes. Through this tale of the trauma of war, existentialism and love, issues of gender in Nepali society are also underlined.

The juxtaposition of Sakambari and Suyor Bir’s contrasting views on life is also handled beautifully. While Suyor depends on the external world to create a meaningful life, Sakambari is a self-assured woman who believes in creating meaning herself. This contention is most evidently demonstrated in a metaphoric, floral conversation between them. Sakambari tells Suyor about a flower that does not let bees fertilize it. In response, Suyor is shocked and says, “a flower should not bloom without an aim. A flower has to have some meaning.”

They argue about this for a while until Suyor says, “Because it (the flower) has to wither and fall anyway, why can’t it be extinct fighting a raid?” Suyor’s rebuttal here is considered an allusion to sexual aggression against women and in the novel it is handled firmly by Sakambari, leaving us with this sentence to ponder upon.

“It (the flower) buds for itself, flowers for itself and falls as if accepting that it has to die, whether it fights with the bee or not. Why should it fall being wounded by a bee? It falls for itself. It falls by its own will.”

(With inputs from Asma Firdous.)

You can read an in-depth analysis of the novel here.