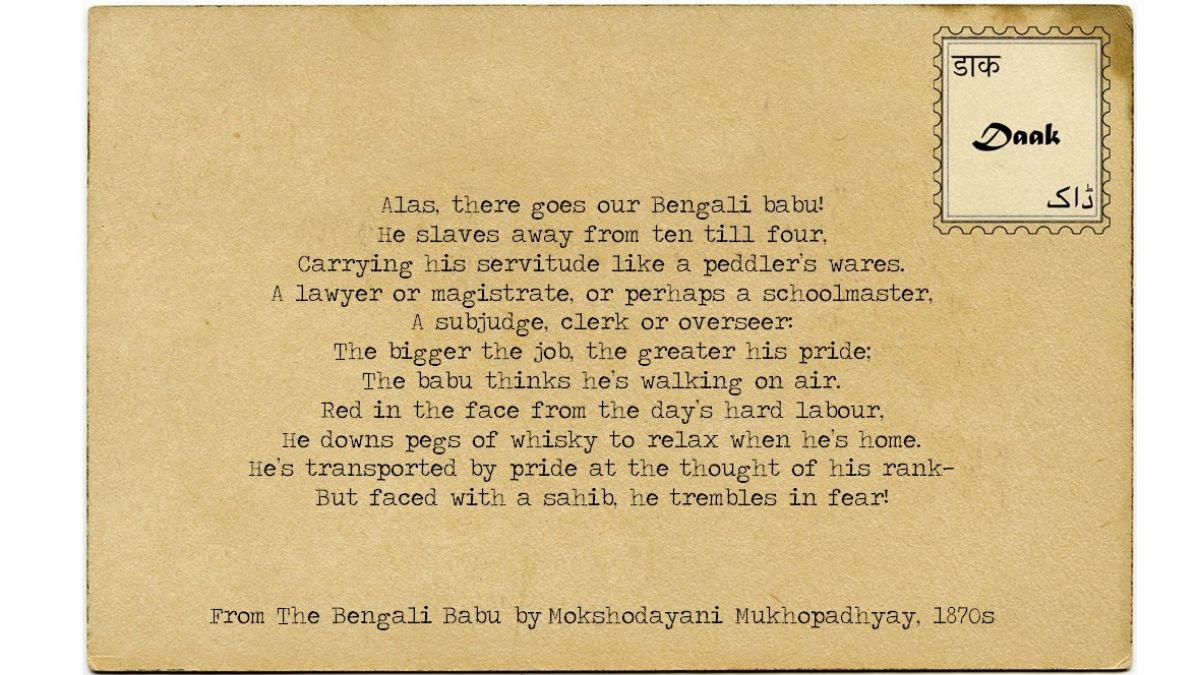 A Fitting Response to Stereotypes about Women: Mokshodayani Mukhopadhyay’s Poetry

The trope of the vain and vacuous woman has always been easy fodder for lazy poets and comedians. Nineteenth Century Bengal was no different. In the 1870s, the leading poet of Bengal, Hemchandra Bandhopadhyay, wrote a satirical poem ‘Bangalir Meye’ (The Bengali Woman), taking a jibe at feminine vanity, malice and superstition.

In a fitting and feisty response, Mokshodayani Mukhopadhyay composed ‘Bangalir Babu’ (The Bengali Babu) where she mocks equally damaging male attributes. Her take on the Bengali Babu’s hypocrisy, pretentiousness and servility was meant as a sharp reply on behalf of all the women who were insulted by Bandhopadhyay’s poem. It is interesting to note that she chose the same weapon as Bandhopadhyay – poetry – to demonstrate the capability and courage of a woman.

Even though this poem in particular and her writing in general created quite a controversy, very little is known about Mokshodayani Mukhopadhyay. She is believed to have been born in 1848 but nothing is known of the cause or the date of her death. She came from an educated and accomplished family, and was the sister of W.C. Bonnerjee, the first president of the Indian National Congress.

In April 1970, she published the first issue of Banga Mahila (Women of Bengal), a newsletter to circulate ideas and information amongst women. She believed that women needed education and a progressive style of dressing to enable mobility in public spaces.

Although there is no original print of the poem, we bring you an excerpt that was reproduced in another journal.

Alas, there goes our Bengali babu!
He slaves away from ten till four,
Carrying his servitude like a peddler’s wares.
A lawyer or magistrate, or perhaps a schoolmaster,
A subjudge, clerk or overseer:
The bigger the job, the greater his pride;
The babu thinks he’s walking on air.
Red in the face from the day’s hard labour,
He downs pegs of whisky to relax when he’s home.
He’s transported by pride at the thought of his rank—
But faced with a sahib, he trembles in fear!
Then he’s obsequious, he mouths English phrases,
His own tongue disgusts him, he heaps it with curses.
The babu’s learned English, he swells with conceit
And goes off in haste to deliver his speech.
He flounders while speaking, and stumbles and stutters,
But he’s speaking in English: you must come and hear.

Alas there goes our Bengali babu!
The lackey’s livery is shed when he’s home.
Bare-chested in slippers, he’s a sight to be seen;
Clad in plain cloth, pleated by his servant,
He relaxes in slippers, or in sandals.
He enjoys his tobacco, lolls about on cushions;
Hookah at his mouth, he thinks he’s in heaven.
The sitting room’s resplendent, and echoes with laughter,
The spittoon’s in front of them, but they spit on the mat.
Alas, there goes our Bengali babu!
Cane in hand, wearing shoes, smoking a cheroot;
Some, sahib-fashion, are hatted and coated.
Not a thought of religion, they lie about and sing,
Crying out on occasion “Bring the tobacco and pan!”

The oil lamp burns brightly, they can’t wait to impress.
Their valour’s displayed to any fool who passes.
With his cronies the babu plays cards or chess
Alas, there he sits, the Bengali babu!

He longs to be fair, scrubs vigourously with soap;
Rubs with a towel till his skin peels off;
Parts his hair in the style of Prince Albert,
Scents himself liberally, and reeks like a civet.

He has fasionable tastes. He loves watching plays;
His mouth stuffed with betel, he smiles with a twist.
He roars like a bull, “Excellent! Encore!”
And by the grace of the shopkeeper, he gets a lungful of smoke.
Head over heels in debt, but he won’t leave his pleasures,
Alas, there goes our Bengali babu!
Here’s one who doesn’t drink, swells with pride at the thought—
The country’s deliverance lies in his hand!

He writes himself down as a Brahmo and turns religious,
Tradesmen and peddlers are amazed at his sermons—
One becomes Brahmo to emancipate women,
Drags out of seclusion the ladies of his clan;
Another, a drunkard, is liberated by drink,
And launches a struggle to deliver the country.
The babu speaks a patter of Bengali and English
But he berates the English with all his heart.
These sports are but nocturnal; wiping his mouth in the morning
The babu is respectful and sober again.