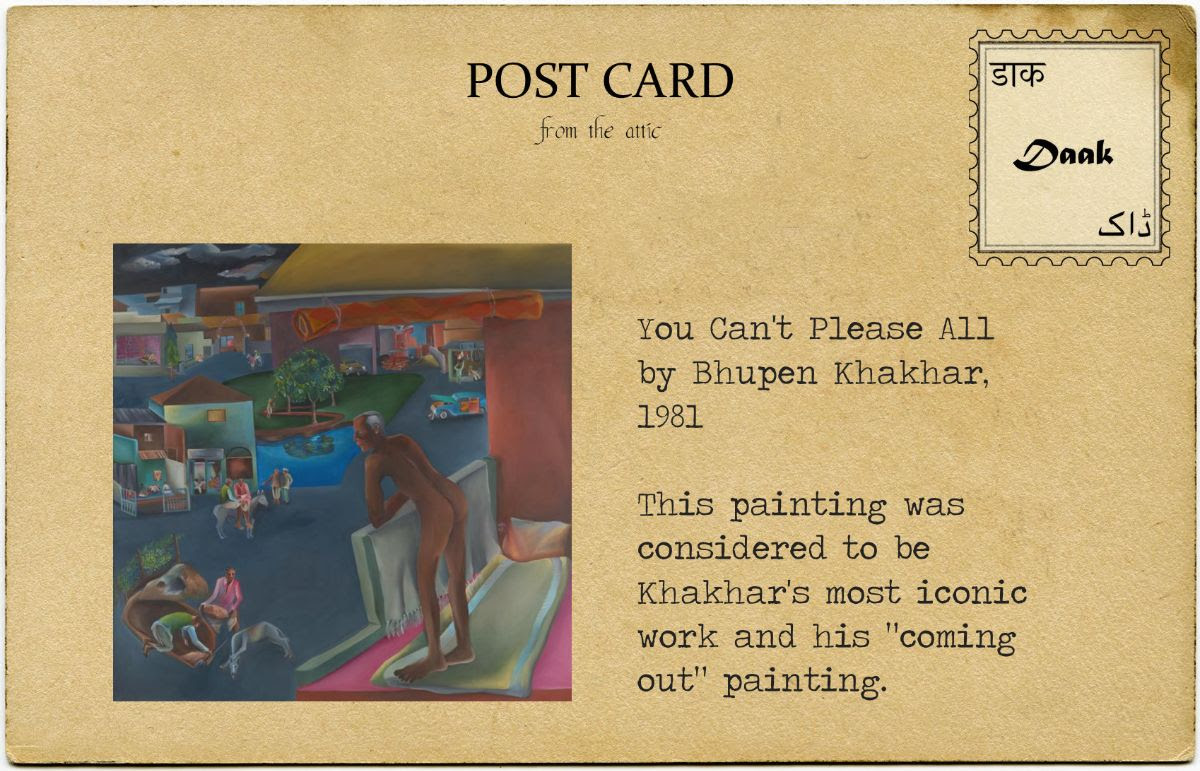 Duty to Ourselves: Bhupen Khakhar’s Figurative and Homoerotic Paintings

In our imagination, we rarely, if ever, see artists as mechanical, office-going common folk. And yet, it is sometimes the most ordinary people who live the most extraordinary lives beneath this veneer of normalcy. Bhupen Khakahr (1934 – 2003), a Gujarati Chartered Account who was also an openly gay artist, is the very definition of this divergence. Although he is known as the first Indian artist to explicitly depict homosexuality and homoerotic themes, his contribution to contemporary art is far more immense.

Khakhar’s career change was brought about by a chance encounter with the poet and painter Ghulam Mohammed Sheikh in 1958. Sheikh encouraged his artistic pursuits and also introduced him to other artists in the Baroda school, an influential group of figurative painters.

Khakhar had a deep interest in ordinary, working-class lives. He observed and depicted them in comic, tragic, and sometimes grotesque ways. As someone who was a cog in a large mechanical machine, he had great empathy for their joys, rituals and struggles. He declared, “Human beings in their local environment, climate, provincial society: this should be the ultimate goal of the artist.”

In the 1970s, Khakhar created a series of ‘trade paintings’ depicting the lives of local workers and tradesmen. While considered to be in bad taste for any serious artist, Khakhar delighted in these paintings. His figurative style drew from both high culture and popular culture; he even had a sizeable collection of cheap prints, toys and kitchy figurines in his studio.

Khakhar also used art as a medium to understand and depict personal themes such as his sexuality and in later years, his battle with cancer.

One of his most iconic works, and arguably his “coming out” painting ‘You Can’t Please All’ shows a naked man witnessing a scene from a famous Aesop’s Fable – a father and son ride through town with a donkey. When the son rides the donkey, the onlookers remark that he too selfish to give up the seat for this father. When the father rides the donkey, they remark that the man is burdening the poor donkey with his weight.

The moral of the story, as Khakhar declares is that “in life we all the time make social adjustments to please people around us. We forget our duty towards ourselves. What we should do in art and life is do exactly what one likes.”

In another painting ‘Two Men in Varanasi’, Khakhar deals with love and desire stripped of caste and social barriers. The fact that the setting is the holy city of Benaras is deeply significant. The paintings had to be locked away just two days after it was first exhibited.

The two lovers locked in embrace are both inside and outside the setting, their love perhaps both a celebration of, and defiance against religion and spirituality and devotion.

(With inputs from Haris Ahmed)