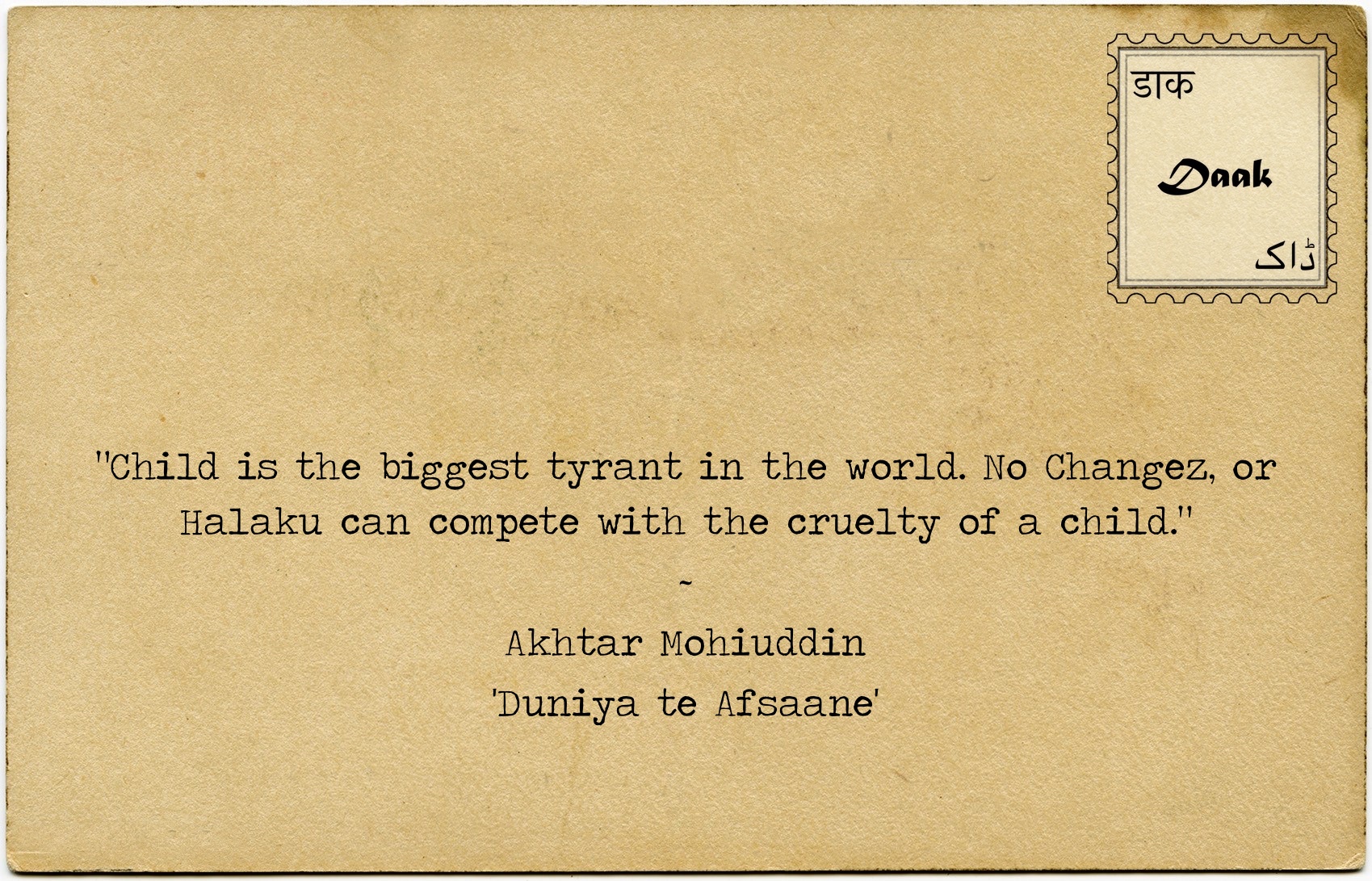 Childhood is a delicate time for individuals. A significant portion of our identity and personhood is formed due to our experiences during this period: our struggles and attachments, the prejudices we were raised with, and the traumas we encountered. It is therefore, imperative to reflect upon, and examine our childhoods from time to time–digging deep into our trunk of memories and bringing out the significant ones to confront.

Kashmiri writer, Akhtar Mohiuddin, in an essay titled “Duniya Te Afsaane” (The World and a Tale), does just that. Mohiuddin (1928 – 2001) was a novelist, playwright and short story writer whose work is famed for its contribution to the literary genre. He wrote in Urdu and later in Kashmiri. He received the Sahitya Akademi Award for his short story collection but later returned it in an act of protest, aligning himself with the political movement in Kashmir. In this essay, he confronts his childhood prejudices, transitioning from memories of the past to the present moment of creation–writing characters of a fictional story. Through this narration, he confronts a stark and little spoken of reality in Kashmiri society: social stratification and caste prejudice.

He recounts the story of the waatal, a group of people long stigmatised for a lower status in society. The essay starts by mentioning how the waatal are not Aryans, like the rest of the Kashmiris believe themselves to be, but rather belong to the tribe of nagas. From there on he goes to describe how, as a ruthless child belonging to an upper class family, he inflicted pain and targeted his classmate, Samad Sheikh, a timid boy from this particular community.

Who knows how many generations of pushing and shoving; how many ages of being trampled over; the history of his community, live as a dark cloud on the skies of this boy’s mind–a dark cloud that throws lightening bolts of fear and trepidation.

In making him the target of his oppression, the writer also seems to have gotten intimately involved in Samad Sheikh’s life. He regularly visits his neighborhood and remembers the boy’s parents who were deferential yet hesitant to offer him tea lest they pollute this boy of higher birth. In his visits, he makes a great show of dispensing wisdom, all the while keenly observing the characters of the neighborhood–the thief, the mad woman and the old man whose fourth wife did not let him into the bed chamber.

Midway into the story, he speaks of how once Samad Sheikh left school, he forgot all about the world of waatals. However, one day while writing a particular sentence, his memory is jolted to life and he realises that each of his characters are just reimaginations of the people he knew from a forgotten world. He recounts them in detail, only to say that finally, he felt at peace by confronting his own childhood prejudices. It is thorough this process of engaging with his memory that he comes to terms with his childhood disdain for an entire community. While he grew up thinking himself to be superior, he realises that the waatal are closely tied to his own soul. He says, “[c]hild is the biggest tyrant in the world. No Changez, or Halaku can compete with the cruelty of a child.”

Mohiuddin not only paints a vivid picture of each of these characters and their lives, but also leaves us wondering about the prejudices that haunt our own childhoods, forcing us to acknowledge them with gentleness.