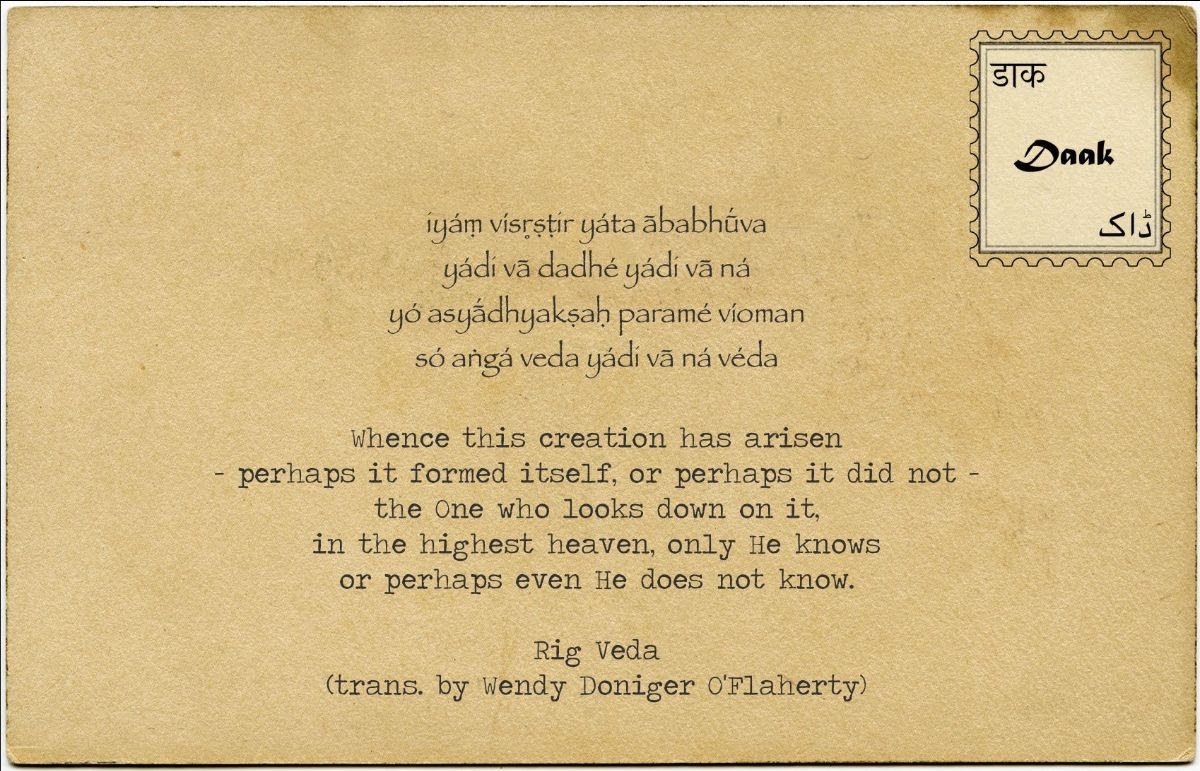 Beyond Dualities: The Hymn of Creation

The ability to think critically and ask questions about existence has been the cornerstone of human evolution. Even religious and spiritual texts have evidence of this curiosity and inquiry. Perhaps the earliest known example of this can be found in the Nasadiya Sukta (which translates to “not the non-existent”), also known as the Hymn of Creation, found in the tenth mandala of the Rig Veda. Believed to be composed in the 9th century BCE, its concern with the origins of the universe has continued to fascinate scientists and philosophers alike.

In the opening line itself, the text establishes a mysterious state of being where neither the non-existent nor the existent exist. This state is occupied namelessly and soundlessly by the One who is beyond dualities such as life and death, being and non­-being, day and night, and so on. While the next few verses describe the birthing of the universe by the One through thought and desire, it is the last line that leaves the reader with a great perplexity: who or what created the Universe cannot be known, even by the maker himself. This finale has also been interpreted by some as the earliest sign of atheism and religious skepticism.

Read the full poem along with its translation below:

There was neither death nor immortality then.
There was no distinguishing sign of night nor of day.
That One breathed, windless, by its own impulse.
Other than that there was nothing beyond.

Darkness was hidden by darkness in the beginning,
with no distinguishing sign, all this was water.
The life force that was covered with emptiness,
that One arose through the power of heat.

Desire came upon that One in the beginning,
that was the first seed of mind.
Poets seeking in their heart with wisdom
found the bond of existence and non-existence.

Their cord was extended across.
Was there below? Was there above?
There were seed-placers, there were powers.
There was impulse beneath, there was giving forth above.

Who really knows? Who will here proclaim it?
Whence was it produced? Whence is this creation?
The gods came afterwards, with the creation of this universe.
Who then knows whence it has arisen?

Whence this creation has arisen
– perhaps it formed itself, or perhaps it did not –
the One who looks down on it,
in the highest heaven, only He knows
or perhaps even He does not know.