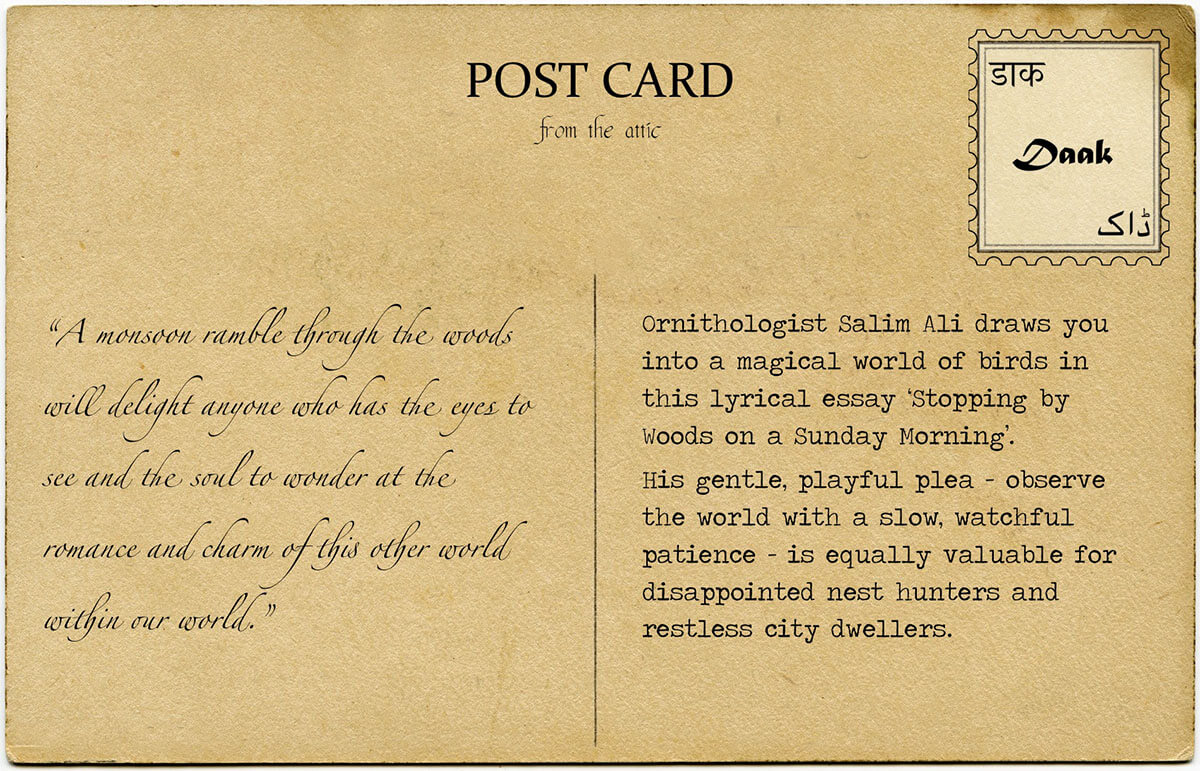 A Slow, Watchful Patience: Salim Ali’s Essay, Stopping by the Woods on a Sunday Morning

As slick city dwellers, it is easy to develop an aversion to the crows and pigeons that seek asylum in our balconies. But Salim Ali, the original ‘Birdman of India’, shows us a different way to look at these pesky creatures.

As a pioneer in the field of Orinthology, Ali did not have to adhere to rigid norms of scientific documentation. As a result, his writing is wonderfully spontaneous and anecdotal. In this essay published in 1930, he invites his readers on a “Sunday morning late in August for a jaunt into the exquisite country surrounding the city.” He laments that “no ordinary photograph can ever hope to do justice” to the effervescence of this wilderness.

And yet, in recounting his excursion, Ali does just that. Without the aid of sophisticated lenses or filters, he captures the abundant warbling, courting and nest-building around him; no detail is too small for his childlike attention and delight.

In fact, Ali’s lyrical essay is not so much an account of birds, as it is a gentle, playful plea to pay attention to the world. His counsel–observe the world with a slow, watchful patience–is valuable for both disappointed nest hunters and restless 20-somethings. In due time, he assures, the world will unfold and reveal its secrets.

A monsoon ramble through the woods will delight anyone who has the eyes to see and the soul to wonder at the romance and charm of this other world within our world.

In Ali’s case, these secrets include practical and amusing lessons in communal living and fearless parenting such as:

The harmony within the fantail household is an object lesson in domestic give-and-take. We are astonished at the way in which three strapping, grown-up, hungry chicks can accommodate themselves amicably in this diminutive domicile.

The remarkable thing about this nest is that is hangs directly over a used cattle path…Each time an animal passes by, the nest must be brushed aside and shaken violently. The bird is undoubtedly an optimist; but it has at least the courage of its convictions and is now well on the way to bringing up a family…

Unlike its melancholic namesake (“Stopping by Woods on a Snowy Evening” by  Robert Frost), Ali’s essay leaves you with a sense of fortuitous discovery. Regardless of the extent of your interest in birds, this is a must read if you wish to delve into a charming “other world within our world.”